The Balance Of Our Tour: Everything Is Both Different And The Same

After 21 days on the road, 2557 miles driven and countless cafeteria meals — things are both different and the same. For example, before the tour our van was just another rental car with nothing unique about it. We returned it well used, more fragrant (!) and with a new name: the planet of Tranquilandia. 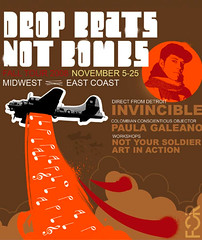 Maybe more importantly, when the tour started the entire country was waiting with baited breath for the results of the election. Now we know that Obama will be our next USpresident. According to most people I’ve talked to, this means that some positive changes are likely to come about, but that we are not going to see an overhaul of the entire world order. Before the tour, political hip hop from Detroit had nothing to do with youth resistance in Colombia. Now Invincible’s rhymes and Paula’s stories of creative resistance are flowing together — in people’s imaginations, thoughts and maybe even dreams. And yet, there is

still war in Colombia, displacement in Detroit and a poverty draft of young people of color and the poor.

If we were executives in a big corporation we might ask: what are the measurable outcomes of our work? Was there return on investment? Our questions are framed differently in this laboratory of resistance (as we like to call it), but they are still questions we have to ask ourselves: what is the balance of this tour? We stretch our necks to look around us: have we changed the world yet? Are things different now? Is there less war, violence, poverty and racism? Is there more revolutionary love?

I can safely say yes, we brought people together. We made connections between local, national and international struggles. We worked with and supported student organizers. We opened up spaces for important issues to get talked about. Folks felt inspired. And as organizers we learned some good lessons.

I invited a friend and supporter of the FOR Colombia program to our final workshop and event in New York City. He showed up with his three younger siblings and afterwards wrote me an email saying, “We just got home from the event in Manhattan and I wanted to thank you again for the invitation. My siblings thought it was a great, interactive event. Afterwards, they told me that that was the first time they heard of conscientious objection and the first time they ever had a space to talk about the military in a critical way. I think it helped for them to hear about something that could be considered “radical” from someone other then myself. The conversations that continued after the event were ground breaking and I think it brought us closer together.”

As far as I’m concerned, his email spoke to a success, albeit on a microcosmic level, of this tour. After all, this movement is made up of people: people and their families, friends and enemies, co-workers, bosses and neighbors. As people we are trying to love and challenge each other. Through one of our workshops, my friend had the opportunity to both break new ground with his family in taking a critical look at militarism, while at the same time feel closer to them. What else are we doing if not bringing our passion to create a more just world to the very center of our personal relationships?

Last spring I heard Andrea Smith speak, a native activist/academic and founder of Incite! Women of Color Against Violence. She suggested that the left has something to learn from the way that activists on the Christian right invest their time and resources in making relationships with people. She used the example of phone banking: instead of asking for a donation or contact information, they simply call you up to say a prayer for your health and well being. This action creates a connection and is a long-term investment in that individual; it is the Christian right’s version of “movement building.” She challenged the folks in the audience to think about how we can invest in the movement for the long term and not always be focused on our immediate goals of raising X amount of money or securing X number of signatures.

I cannot claim that our Drop Beats Not Bombs tour perfectly carried out a “movement building” model. Like I said above, we faced our share of challenges along the way, we learned from them and have hopefully become better organizers because of them. But if anything is a measurable outcome, it is the relationships we built along the way — the relationships the five of us on tour developed with each other during the countless hours in the van (we connected Detroit to East Los Angeles to Boulder to Minneapolis to Colombia), the relationship that we started (and will continue to cultivate) with student organizers, the connection we made with an Israeli conscientious objector in Ithaca and the relationships strengthened among my friends’ family because the tour offered a space for discussion, connection and analysis.

Our last day together we spent as tourists in New York City. Paula wanted to see the Statue of Liberty so we took the boat there and clutched our coats to our ears to keep out the cold as we peered up at that huge, green lady of liberty. I felt a mix of feelings: hope, disappointment, exhaustion, idealism and cynicism. Somehow it seemed strangely apropos to be there — in the balance of it all, with a new president-elect, with lessons learned from our time on the road, the Statue of Liberty was there in all her splendor. I thought to myself that she does stand for something, for a big vision of what could be, one of those archetypal symbols that loom on our psychological horizon. And at the same time, I wished our country would live up to what she stands for.

That’s why everything is both different and the same. Thankfully change has taken place in this country over the years, through the tireless efforts of so many who have come before us. And there is still lots to do.

Thanks to all of you who put in so much hard work to make the 2008 Drop Beats Not Bombs tour a success. As Invincible says, “that’s what’s up!”