Conscience: Two Soldiers, Two Pacifists, One Family; To End All Wars: A Story of Loyalty and Rebellion, 1914-1918 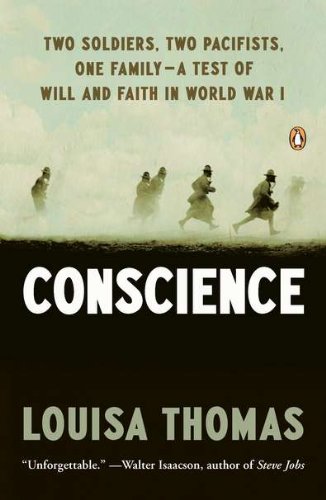 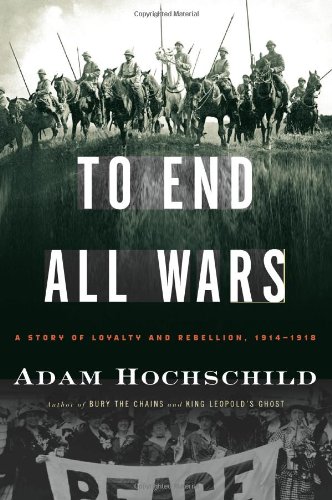 Louisa Thomas never uses the word quixotic to describe the lives and passion of her great-grandfather, Norman Thomas, his pacifist brother Evan, or their soldier siblings Ralph and Arthur. But the nostalgic, ambivalent echo of lives largely unrewarded, when spent in loyalty to conscience, gives a certain reverence to this family biography, and you can almost see them tilting at the windmills of idealism.

While Norman Thomas is widely recognized as the perennial Socialist Party presidential candidate, founding member of many pacifist organizations, and editor first of The World Tomorrow (now Fellowship) and later The Nation, his brothers are equally central pillars of this story.

“After World War I, Norman wrote a book calledThe Conscientious Objector in America… The dedication was to his brothers, with whom he had so often disagreed. That book was, therefore, a family story, and so is this,” says Louisa Thomas in her preface. But “In the Thomas brothers’ history, we all might find some of our own.” Her promise here is completely fulfilled. Exhibiting a satisfying balance of family affection and journalistic objectivity, Thomas describes an era and set of ideas that still demand our consideration today.

In an age when we obsess on a theory of the separation of Church and State, this story reminds us that citizenship, for most Americans, is still an ongoing dialogue between political and religious ideologies which together define both individual and corporate biographies in deep and important ways.

The description of the McKinley-Bryan presidential race and the rise of populism at the end of the 19th century cannot be read without the color of current politics tinting the view. “Populism can be ugly, infused with racism and xenophobia. In those days, many populists encouraged farmers to fear foreigners, who, they suggested, would take their work and ‘dilute’ their culture and blood. They sometimes embraced policies potentially more ruinous than the ones they meant to fix. At the same time, populists kept alive egalitarian ideas that countered the inequalities and excess of the Gilded Age. The people demanded to be heard, and their demand was backed by combustible energy.”

Among the story’s wonderful accomplishments is the clear sense of development over the lifetimes of the family members; we see the growth of clarity and commitment to pacifism, even when it requires somewhat monumental movement from conservative Christianity to progressive Socialism, on the part of Norman and Evan. It captures well the notion of crystallization of conscience to describe the experience of war on those sensitive to moral issues. And it also explores with intimacy and elegance the space for tolerance in a family with widely divergent views.

The surprising, beguiling ease with which the country moved from the impossibility of any war to the inevitability of a world war during Woodrow Wilson’s term as president unfolds clearly in Louisa Thomas’s narrative. (The Thomas brothers knew — and were admired by — Wilson, who listened to but rejected Norman’s case to avoid the war and Evan’s case to respect conscientious objectors.) The surprising, disturbing slide to censorship and suppression of dissent fuels the sense of injustice with war and warring for the Thomas brothers.

The careful exploration of an emergent, organic understanding of conscience as the root issue in conscientious objection is the richest gift of this biography. It should serve to stir a deeper discourse on the place of conscience in political, theological, economic, and social life today. We can be grateful to the Thomases and their peers for close and serious thinking on conscience, and especially to this great-granddaughter for offering this story.

Adam Hochschild is a master storyteller with a deeply grounded appreciation of the period of the First World War and an excellent complement to Thomas’s Conscience, largely from the British perspective. He also takes a biographical approach, cleverly pairing sibling contrasts of progressively more pacifist and socialist sisters, such as Charlotte Despard, and their belligerent brothers, like John French, who rose through the Boer War to become leader of Allied Forces in World War I.

The choice of key characters also echoes one of the underlying realities of the late 19th and early 20th century as aristocracies melted into increasingly democratic societies — but could not easily shed their patrician and Victorian values and world views, when confronted by suffragettes, socialists, and revolutionary communists beginning the slow dismantling of an Empire grounded in loyalty to royalty. A young Churchill, an influential Rudyard Kipling, the rising Bertand Russell, Alfred Lord Milner and Lady Violet Cecil, Keir Hardie and Sylvia Parkhurst, are colorful threads in the storyline as we see the troubled shifts of conscience when confronted by the horrors of war.

Hochschild’s telling is a chilling, vivid detailing of the utter brutality of warfare cauterized by new technologies: machine guns and barbed wire, tanks and aerial bombardment, mustard gas and flame throwers. Despite the standard uses of censorship and cooptation of the press, technologies also allowed a quicker distribution of details which fed a firm foundation and rising tide of pacifism. Hochschild tells this story through the voices of suffragettes and socialists, some of whom retreated to support for the war, expecting to achieve their goals by supporting a victorious Allied army, but others, led by Keir Hardie and Bertrand Russell and the No-Conscription Fellowship, a cognate of the Fellowship of Reconciliation in the United States, were increasingly public in their opposition to the war.

It is clear that courage of pacifists was necessary and tested by the Allied governments through harsh incarceration and death threats as well as public scorn and beatings. However, Hochschild’s lack of specific reference and assessment of the role of the emergent FOR in England and Europe is a disappointment. And there is a larger, general absence of detail about either loyalty or rebellion around the war, though this is acknowledged and explained by Hochschild as basically outside the intended scope of the book. Vera Brittain, a later chronicler of FOR (see her 1964 book, The Rebel Passion), is cited in passing, but none of the other early voices from the United States — such as Norman Thomas or John Nevin Sayre — make an appearance. Both works belong in any serious library on issues of conscience and war and make good companion pieces.

Conscience: Two Soldiers, Two Pacifists, One Family–a Test of Will andFaith in World War I

Mark C. Johnson is executive director of the Fellowship of Reconciliation. A longer version of theConscience portion of this review appears online at forusa.org.