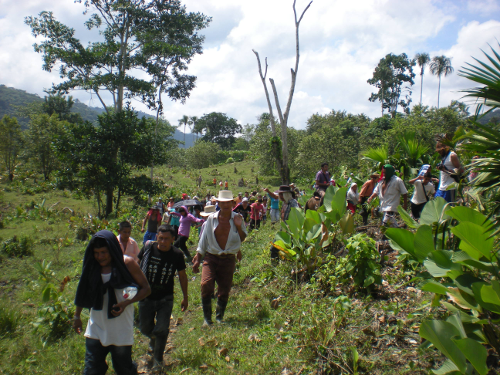 This Is Peace: “Walking The Word” in Colombia

“Caminando la palabra,” or “walking the word,” is how Siriaco and Diego*, participants from indigenous Cauca and Guajira communities, described what we had done on our recently completed Peace And Solidarity Pilgrimage to Rodoxalí, in this war-torn northwestern Urabá region of Colombia.

Organized by the Peace Community of San José de Apartadó, 150 people converged upon the village of Rodoxalí to confirm and confront the presence of death-squad paramilitary groups. The pilgrimage was organized in response to reports that four people had been killed, and paramilitaries had kidnapped and disappeared a young man and demanded that the area’s campesinos (small-scale farmers) give them information and supplies. An estimated 28 families subsequently fled their homes in fear.

Regrettably, such incidents are nothing new: paramilitaries in conjunction with government army and police forces, as well as guerrilla groups, have killed and displaced hundreds of people and communities in the Urabá region since the 1990s. This begs the question: How might “peace” actually be created in such a context?

As part of its 16 years of community struggle to defend the survival and self- determination of the area’s civilian and campesino population in the face of the country’s warring armed groups, the Peace Community invited journalists, academics, members from its 11 villages, delegates from other Colombian campesino and indigenous communities, and international protective accompaniment organizations to join the caravan. Beginning on October 6, we marched through several Peace Community villages and adjacent settlements and towns to reach Rodoxalí.

Upon arrival, Peace Community leaders proposed to the village’s six remaining families that we accompany them for a few days. They happily accepted, noting that such a large contingent of people had not been seen there for two decades. They revealed that, even before the most recent displacement of people, the village had been a skeleton of its previous self since the mid-1990s. It once was a thriving settlement that hosted local soccer tournaments before paramilitaries and the national army displaced the local population, reportedly in preparation for the nearby Urrá hydroelectric dam project, killing many residents and burning down most of the houses in the process.

They mentioned the heavy paramilitary presence currently in the region and a recently distributed paramilitary pamphlet claiming to support the campesinos, despite widespread beliefs in the region that they are in fact carrying out a land grab. Our caravan would later encounter army soldiers casually dressed and taking photos of us near the site of a recently vacated paramilitary dormitory. Yet, they said they had no specific knowledge of any paramilitary kidnapping or presence, suggesting at the very least a tacit collusion with the death squads.

We set up our hammocks and tents in some vacant buildings. The recently abandoned house in which my group stayed was particularly chilling: in two rooms, clothes that had been left behind were scattered and molding on the ground. In the kitchen, there was a rotting box of spilt flour, and small ducks and chickens wandered outside under the lemon and cacao trees scavenging for food…

When families are forcibly displaced, they take whatever they can carry on their backs and horses, which often means they bring only themselves, their children, and any large animals such as pigs, which serve as the primary savings of small- scale farmers. What is left behind is likely destroyed or lost forever. This unarmed pilgrimage of peace and solidarity with these families was organized to confront the paramilitaries and complicit state forces and to assert the rights of the area’s campesinos to work their farms as they desire: without threats and killings by armed groups that compete to control the land.

However, the paramilitaries were nowhere to be seen. The following day, we walked to an adjacent settlement where they were reportedly camped, but they had retreated into the surrounding hills from there, too. Pilgrimage participants believed that this revealed the paramilitaries’ own recognition that they lack a valid verbal defense before such a civilian delegation. Participants also suspected that national police and army officials in nearby Nuevo Antioquia —through whose checkpoints the delegation had passed the day before— informed the paramilitary groups of the caravan so that they would hide their presence.

Officially, the Colombian government claims that such “paramilitaries” targeting civilians don’t exist. It asserts that, in addition to guerrillas, there are only drug- trafficking “criminal bands.” Our large contingent of people from other regions and countries, especially accompaniment organizations such as the Fellowship of Reconciliation (FOR) Peace Presence, served to testify to the witnessed realities to our support networks in the diplomatic corps and human rights organizations. According to Peace Community member Danilo, the state officials probably told the paramilitaries: “if they see you, we’re screwed.”

When we departed Rodoxalí the following day, residents said that they were energized by our visit, felt accompanied and not alone, and invited the Peace Community to return. At the conclusion of the pilgrimage in the community’s Mulatos Peace Village, we reflected on what had occurred and what we had done. With local accounts, we had unfortunately confirmed the tragic forced displacements induced by the paramilitary presence, with apparent government forces’ backing.

Additionally, though, the visit provided relief to those families who continue to resist fleeing their homes and laid the groundwork for future visits. We hope the paramilitaries and the army will respond to this act of civilian solidarity by abstaining from future killing and forced displacement, knowing that their actions will be reported to the outside world.

To put it bluntly, our group of unarmed civilians caused an armed death squad to flee into the hills. Indigenous and Peace Community leaders commented that, without the accompaniment of organizations like FOR —which the Peace Community positioned at the front of the caravan to demonstrate international observation and lead the line in any encounter with an armed group— the paramilitaries probably would not have retreated. The pilgrimage demonstrated that the collective action of walking and presence of unarmed civilian campesinos joined by solidary accompaniers can open space for people to resist displacement and harvest the fruits of their agricultural labor with dignity. As stated in the Peace Community’s subsequent statement: “Weapons will not intimidate us, and before the sowers of death, we will always choose life.”

Just as significant was our walking itself. Parts of the path were brutal. There were long stretches of thigh-high mud, in which people’s rubber boots got stuck. Others would move near to help pull them out of the ground. We had to cross rivers multiple times, which became more challenging after an afternoon of heavy rain and thunderstorms raised the water level. People locked hands while leaping from rock to rock. At one deep crossing, a senior community member immersed himself in the three-foot deep water, literally pulling horses and people across to the other side. Peace Community leaders made our commitment explicit at the outset: “We are in a war zone, but no one will be left behind.”

One of the main lessons of the Peace Community of San José de Apartadó is to re- think and practice “peace.” This concept usually refers to some future and idealized attainment of “harmony.” Yet, as the vaguely or undefined utopia that is the opposite of an equally vague “violence,” peace as such is a fairly useless term. Even the most brutal warlord justifies their actions as in the pursuit of “peace.” If we limit our understanding of peace to an abstract and utopian opposite of open warfare, we relegate the possibility for safe, clean, and meaningful lives to the actions and negotiations of states and armed groups. We forfeit our own agency. The Peace Community illustrates that even as the war rages on, we cannot cede our power to create the lives we deserve to groups of oppression and domination. The task is enacting peace as dignity and community self-determination here and now.

This pilgrimage pointed to a more profound praxis of peace, signaled by Siriaco and Diego as “Caminando la palabra”: we walked the word. We did not merely profess to support some vague notion of peace, but actually generated relationships of care and love amongst ourselves as we marched in solidarity with the threatened families of Rodoxalí. Hopefully, the political pressure exerted upon the paramilitaries and the state by the caravan opened space for these civilian campesinos to remain on and farm their lands without being forced to collaborate with armed groups. Through greater visibility and a wider support network, including the Peace Community, journalists, and international human rights organizations, Rodoxalí’s farmers can draw on a greater array of resources in their struggle.

More so, as we walked together, we actually lived the peace we want to live, rejecting the logic of competition and individualism and affirming that everyone’s life must be defended by a collective political project. We can do it, and do it now, walking and working together in solidarity, as campesino and indigenous communities, academics, journalists, and international accompaniers. In the words of Peace Community member Yirleidy: “Peace is everyone working together towards the same goal. Peace is community.”

*The names of people quoted in this article were changed because of safety concerns.

Chris Courtheyn is a Ph.D. student in Geography at the University of North Carolina at Chapel Hill, and a former accompanier with the Fellowship of Reconciliation (FOR). He can be reached at courtheyn@unc.edu. A special thanks to FOR’s Luke Finn, Michaela Soellinger and John Lindsay-Poland for contributing their ideas, photos and edits.