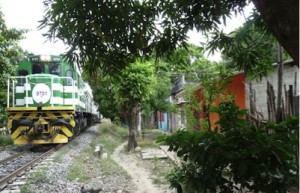 Barges and cargo ships dot the distant horizon off the white shores of Santa Marta. Seated on the Caribbean Sea between sandy beaches, small fishing villages, and the Sierra Nevada mountain range, Santa Marta was destined to be a centerpiece of Colombia’s growing tourism industry.

But in the 1980s, as the country pushed to open doors for foreign investment and mineral extraction, the region underwent an industrial transformation. In 1982, the first coal port arrived in Santa Marta—a wide, metal pier linking shipments to off-shore barges. Slowly it became a platform for coal exports, threatening local tourism, destroying natural habitats and traditional ways of living, dividing small communities, and pillaging mineral resources.

In a country with the largest number of internally displaced people in the world, the communities in nearby La Jagua, the country’s most productive coal mining region, contain the newest experiences of forced displacement. They are caught between the contamination of once-fertile lands that are no longer apt for food production, local waterways no longer suitable for human use, and carcinogenic air-quality responsible for respiratory diseases and skin rashes.

The Other Side of Coal

To compete with the rate of mineral extraction throughout Latin America, and to encourage international investment and economic growth, the Colombian government proposed a set of mining norms for the growing sector. Hoping to fuel economic prosperity by tripling mining extraction and doubling exports by 2021, the government deregulated industry, reformed tax law, and created special incentives to open the doors to foreign investment and development of large-scale and open-pit mines. When the country was divided into categorized, qualitative mining zones, Cesar Department was estimated to have 6,556,050 million tons of coal reserves (INGEOMINAS), and today Colombia is the second largest coal producer in Latin America.

The tiny fishing village of Don Jaca is seated between operations run by Swiss-owned Glencore in Port Prodeco and Port Drummond Co. (a privately owned company based in Birmingham, Alabama), and has been forgotten. Cutting through the center of town, the Atlantic Concession Rail Line runs just a few meters from a row of small, concrete homes as it connects the wide, open-pit coal mines in La Jagua de Ibirico, in the department of Cesar, to off-shore ports in Santa Marta. Less than 10% of the coal extracted from La Jagua is transported by road; the majority travels via the Atlantic Concession Rail, connecting the communities of La Jagua and Don Jaca—the ends of the line, so to speak.

For the past decade the line has operated here. Shipping up to 66,500 tons per day, with freight trains that stretch over 100 cars long, the Atlantic Rail leaves behind a layer of dark coal dust over everything. The open-air trains carrying coal generate myriad health issues for locals—respiratory problems, hearing loss, and skin disease run rampant throughout the community. Once-fertile farming lands have slowly ceased to produce. Stained with yellowing spots, the leaves of remaining crops crinkle and dry under the sun. Littered with the remnants of coal dust and residue, Don Jaca has become a microcosm of the industrial port-lined coast.

By the end of 2012, mining had taken over 1.8% of the Colombia national territory, with projections indicating it could one day reach up to one third of the country. As they expanded, mining zones unfolded across previously-occupied territories. Open-pit mines usurped productive farm lands, redirected local riverbeds, jeopardized natural resources and food sovereignty, and divided and displaced local communities from their homes, clearing the way for further expansion.

In the span of over two decades, coal extraction in Cesar grew from local artisanal activities to a hub of mega-projects and open-pit mines. Active mining is concentrated around La Jagua de Ibirico, a dusty, expansive valley surrounded by the Perijá Sierra Mountain range. In the 1990s, the first multinationals arrived, led by Drummond Company, which accounted for 70% of the industry until 2009, and todayoperates the country’s second-largest coal mine, La Loma. Attracted by large amounts of high-grade reserves and proximity to ports, Drummond quickly increased its production, and other companies followed suit. Glencore Xstrata (Prodeco) and Goldman Sachs Colombia Natural Resources also operate in La Jagua.

But since the companies’ arrival in the region, La Jagua has reported an increase in violence, armed groups, and forced displacement. Between 1997 and 2004, 123 massacres were reported in Cesar, totalling 607 deaths. In the same time period, La Jagua reported 200 killings, fueling the displacement of 58.3% of the total population.

The departure of many La Jagua residents out of fright and desperation cleared the land, making it accessible to mega-projects. According to Ximena Gonzales, a researcher at the Javeriana University, “many abandoned their land or sold it at below market prices out of fear.” Fleeing to the urban center of La Jagua de Ibírico, residents left their lands unattended, allowing them to be “converted to palm oil plantations and coal mining operations.”

Forced displacement for economic and territorial gain is not uncommon in Colombia, and is committed by illegally- and legally-armed groups alike. As calculated in Basta Ya! Colombia: Memories of War and Dignity, between 1985 and 2012, 26 people were forcibly displaced every hour in the country. Of the human rights violations reported in the last decade, 80% took place in municipalities engaged in mining and mineral extraction, with 87% of all forced displacements coming from these areas. As previously noted, such instances of forced displacement mark Colombia as the country with the highest number of internally displaced people in the world.

In La Jagua, those who remained clung to the lands and livelihoods they had known their entire lives. By trade, those residents were subsistence farmers who dedicated their lives to small-scale agriculture. But as mega-projects expanded, productive lands in La Jagua slowly diminished, becoming deep holes of mineral refuse. In 2010, a government-commissioned study revealed that coal dust particles in the atmosphere had exceeded livable limits. Deemed unfit for human habitation, El Hatillo, Boquerón, and Plan Bonito were mandated for evacuation. Companies operating in the region were given two years to negotiate the conditions and resettle the villages.

Government-mandated resettlement is a relatively recent phenomenon, and the two cases that have been carried out in Colombia have occurred in the two largest coal mining areas of the country—La Jagua de Ibírico, and El Cerrejón in La Guajira Department.

In the midst of an ongoing internal conflict, exacerbated and fuelled by centuries-long dispute over territory and access to natural resources, the future of a country dedicated to mineral extraction is worrisome. While guerrilla fighters and the Colombian government engage in a dialogue in Havana that seeks reparations for years of social and economic inequality, mega-projects are expending the country’s mineral reserves at an unsustainable rate. The mineral extraction industry is presented as the path towards economic prosperity. But if it does not replace territorial losses or repair social, economic, and environmental damages, it will instead further fuel the cycle of conflict over territory and resources.