The Rise and Fall of ‘False Positive’ Killings in Colombia: The Role of U.S. Military Assistance, 2000-2010

May 13, 2014 | Human Rights, Impunity and Justice, News, Our Partners, US Drug Wars and Military Aid 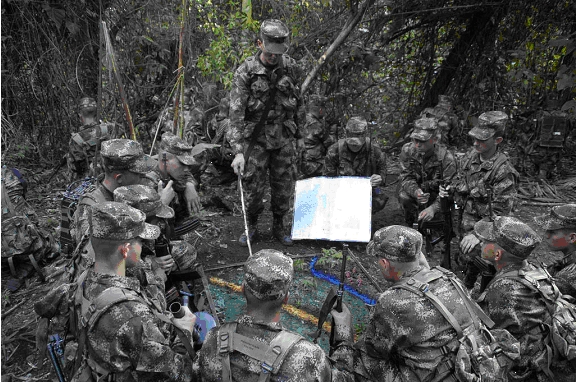 Our partner John Lindsay Poland has been working on a ground breaking work looking into the relationship between levels of US aid to Colombia, one of the highest recipients of US military aid and training in the world, and the incidence one of the most grievous forms of human rights abuse, extrajudicial executions.  The report utilizes statistical analysis, as well as in depth and wide-ranging interviews with both the military and the civilian population that was subjected to this abuse. The report was last week presented to an audience in Washington, and the Spanish language report will be officially launched in book form on the 3rd June in Bogotá. Below is the executive summary in English, followed by a link to the full report.

Executive Summary: Report: The Rise and Fall of ‘False Positive’ Killings in Colombia: The Role of U.S. Military Assistance, 2000-2010 by John Lindsay Poland (May 8 2014)

This study advances a methodology for assessing the human rights impact of U.S. military assistance, by looking in depth at a discrete set of human rights violations carried out by the Colombian armed forces. It seeks to understand what role, if any, U.S. security assistance from 2000 to 2010 played in increasing or decreasing the commission of “false positive” killings — extrajudicial executions by the Colombian Army of civilians claimed to be have been killed in combat.

The United States has trained, armed and equipped the Colombian armed forces at a cost of $6.8 billion since 2000. Supporters cite aid to Colombia as proof that U.S. security assistance promotes human rights improvements. Critics look at the same case and assert that U.S. assistance tacitly encouraged or empowered the Colombian forces to carry out grave human rights abuses. Neither side presents systemic evidence.

The Colombian case is important not only because of the amount invested and the divergent claims about outcomes, but because of the renewed emphasis in U.S. military strategy on “building partner capacity,” reflected in $25 billion in foreign security assistance in 2012. Evaluating the human rights outcomes of this strategy and spending in Colombia is thus critically important for populations throughout the world.

Our findings for Colombia call into question much of the assumed wisdom about military assistance programs. We offer detail about the Colombia experience to model methods of evaluation, show what data is needed, and to demonstrate the importance of post-assistance assessments that may surprise participants, policy-makers, and critics. We found that increased information collection and analysis that would facilitate such assessments is possible.

Army brigades that received high levels of U.S. aid did not show a statistically robust different number of executions, compared to those receiving little aid. Those receiving high levels of U.S. assistance, such as the Counter-Narcotics Brigade, may have been subject to closer scrutiny for their human rights conduct than units receiving significant but less intensive assistance. Statistical ambiguity may reflect the small sample of high-aid units, or the difficulty of identifying units responsible for executions, especially in areas where mobile units operate; much U.S. assistance focused on mobile brigades.

To understand how widespread the practice of “false positives” was, we analyzed the prevalence of the practice of extrajudicial killings across Colombian Army brigades. We found that in 2007, at least one execution was directly attributed to 99 of the Army’s 219 combat battalions and mobile brigades. We identified 117 brigade commanders and 184 battalion and mobile brigade commanders, whose units were directly identified as committing one or more extrajudicial killing between 2000 and 2010.

A question raised by this analysis is the role of military leadership and institutional culture within problematic army units. Three of the five brigade commanders with the largest number of executions reported by soldiers under their command were promoted to command the Army, including the current Army commander, General Jaime Lasprilla Villamizar. General Lasprilla is the active duty officer with the largest number of executions reportedly committed by soldiers under his brigade command, and he received substantially more U.S. training and assistance than his peers.

The provision of intelligence capacity and products is rarely evaluated for human rights outcomes. We found an example of U.S. intelligence assistance to Colombia that, though on its own may not have violated human rights, supported units that had adopted a strategy conducive to extrajudicial killing.

Measurements of the impacts of military assistance should evaluate the performance of individual officers in whom much assistance is invested, and the disproportionate role that commanders have in the performance of troops under their command. These officers and commanders, after receiving U.S. military training, transfer to other units that may or may not receive U.S. assistance, but are impacted by the training provided to individual officers.

U.S. military training, especially at the Western Hemisphere Institute for Security Cooperation (WHINSEC), is practically a required step for the promotion of a Colombian Army officer. Of the 25 Colombian WHINSEC instructors and graduates of the Command and General Staff course from 2001 to 2003 for which any subsequent information was available, 12 of them — 48% — had either been charged with a serious crime or commanded units whose members had reportedly committed multiple extrajudicial killings. A random sample of 25 Colombian officers from approximately the same period showed a better human rights record than the WHINSEC cohort: we identified four (16%) who subsequently led units with multiple extrajudicial executions under their command. Another three officers led units with one execution under their command.

Colombia may have a “systemic [human rights] problem across the country” that is reflected in the high percentage of WHINSEC instructors and graduates implicated in crimes, as one U.S. military officer suggested. If that is the case, it raises a question of how the disproportionate representation of Colombian instructors at WHINSEC, or U.S. funding of Colombian training of other nations’ security forces, contributes to increased respect for human rights.

The number of executions in Colombia fell dramatically after 2008. Evidence indicates that diverse pressures — from civil society, the office of United Nations High Commissioner for Human Rights, and civilians within the Colombian government who engaged the Army, were key to changing an institutional environment that sanctioned, if not encouraged, extrajudicial killings.

If reducing impunity is important to deterring serious abuses, we must consider the United States’ key role in two changes in the Colombian judicial system. The U.S. gave substantial material support for the Human Rights Unit of the Attorney General’s Office, which made significant judicial advances in prosecuting executions by 2013 (although less than 10% of reported executions had advanced to trial). But the U.S. also funded and promoted the implementation of the new accusatory justice system, which has had poor results in prosecuting those responsible for committing executions.

While other branches of Colombian security forces also have committed abuses, this report focuses on assistance to and rights violations committed by the Army, which was a focus of U.S. assistance, and in which human rights concerns had been identified at the time assistance was expanded. The report also examines “false positives” and U.S. aid in greater detail in several regions of Colombia.

This evaluation is not possible without detailed data about human rights violations, U.S. assistance, and Colombian military structure and leadership, compiled by U.S. government agencies, human rights organizations, and private researchers. For more effective assessments, greater transparency about who receives assistance, and the amount and nature of what they receive, and tracking of the human rights performance of those recipients are needed.