May 31, 2014 | Human Rights, Impunity and Justice, News, Peace and Nonviolence 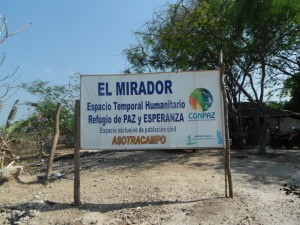 Juan Martinez, community leader of ASOTRACAMPO,  of the El Tamarindo community, has this evening recieved death threats to his personal cell phone.
The message also threatened Colombian activists who have accompanied ASOTRACAMPO.

Please send an email to the [American Embassy in Bogota], or the [Colombian Embassy in Washington] to express your concern. A text you can use is at the bottom of this post.

ASOTRACAMPO have faced numerous threats and daily harrasment for standing up for their rights to equitable and fair treatment while they live on El Mirador. El Mirador is the last of 4 plots on the El Tamarindo land – the people living on the previous three have all been forcebly displaced.
The community of El Mirador, recently declared a “Refuge of Peace and Hope”, is made up of campesinos violently displaced from other parts of Colombia. There has been 2 deaths in the last year. For more information  on El Tamarindo please see: https://nacla.org/blog/2014/3/24/displaced-and-duty-free-el-tamarindo-colombia.

I am writing to express my deep and pressing concern for the welfare and safety of Juan Martínez, of El Tamarindo, Atlantico. Sr. Martínez is a leader of the Asociación de Trabajadores del Campo (Asotracampo),  who recently set up the Refugio de Paz y Esperanza on the franja of El Mirador.

On the evening of the 30th of May, Sr. Martínez recieved death threats directed at him and the community, as well as people who work with ASOTRACAMPO – specifically those of the Comisión Intereclesial de Justicia y Paz and Movimiento Nacional de Victimas de Crimines de Estado.

ASOTRACAMPO have received numerous threats, and their neighbors and community members have been violently forced from their land.  Their struggle is peaceful, and seeks only fair treatment and recognition of their rights as victims of violent displacement.  That they should be faced with such threats is deplorable, and I hope that your government will be able to pressure the competent authorities in Atlantico to ensure the safety and wellbeing of Sr. Martínez and the whole of ASOTRACAMPO.