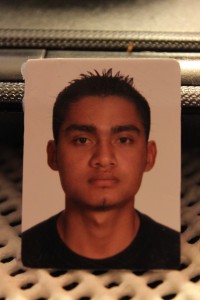 FOR Peace Presence is concerned about the rights and well-being of a conscientious objector who has been held against his will since April 7, 2014 in a military brigade in the department of Arauca.

Yefferson Shayanne Acosta Ortiz, who is accompanied by our partner organization ACOOC (Collective Action of Conscientious Objectors), is 23 years old and originally from Ibagué, Colombia. From a young age he was raised with Christian principles and until he was 19, actively participated in the Pentecostal Church of Colombia.

The details of his recruitment

On April 6, 2014 around 8pm, Yefferson was stopped by police to check his documents (all Colombian men who are over the age of 18 are supposed to carry with them a military service card to prove that they have fulfilled their obligatory military service). The police verified that Yefferson did not have a military service card and told him that he should show up for an appointment at the Military District No. 2 on the following day. On April 7, 2014 he arrived and they proceeded to carry out a medical examination, after which he was incorporated into the military. During a psychological exam, Yefferson expressed that he didn’t want to fulfill his obligatory military service, that his convictions had led him to reject the use of weapons, and he didn’t want to be part of a conflict that had nothing to do with him.

Despite the fact that he expressed his opposition, he was declared “apt for military service.” Two days later he was transferred to a military brigade in the department of Arauca (Grupo de Caballería Aerotransportado No. 18  “General Gabriél Rebeiz Pizarro”). Since that date, he has been held and forced to serve against his will.

Located in a zone of very active conflict between the Colombian army and guerrilla groups, Yefferson has recently been additionally pressured by comments from military officials that his cell phone could be taken away – which would cut off his primary channel of communication with his network outside the base.

The right to conscientious objection is a universally protected right and was also recognized in Colombia’s Constitutional Court’s ruling in 2009. The Colombian military is currently violating this fundamental right. FOR Peace Presence urges those concerned to contact the US Embassy political section (AmbassadorB@state.gov) or the European Union Delegation political section (delegation-colombia@eeas.europa.eu) by email, to express your concern for: