The Fight to Abstain From Violence in Colombia

Written by Nikki Drake, an accompanier on the FOR Peace Presence team. Published originally here in NACLA Report on the Americas. 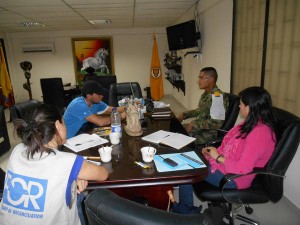 ACOOC and FOR Peace Presence meet with Jefferson Acosta

As he walked into the room, his face was tense and solemn. He had been here for over three months. His name is Jefferson Shayanne Acosta Ortiz, and we were at the army base in Saravena, Aruaca, one of the most dangerous departments in Colombia due to the ongoing conflict between the army and guerrilla groups.

Jefferson was recruited in April to fulfill his obligatory military service. During his recruitment, he expressed his objection to serve based on his religious and moral beliefs of non-violence. He officially declared himself a conscientious objector—meaning the refusal to perform military service—shortly thereafter, upon learning of the nationally and internationally recognized right. Two members of FOR Peace Presence made the 15-hour bus ride to visit Jefferson and meet with military officials as accompaniers of our partner organization Collective Action of Conscientious Objectors (ACOOC), which has been working on Jefferson’s case since his recruitment.

Although conscientious objection gained international attention during WWI as a fundamental right and political exercise to resist war, the practice was introduced in Colombia only as recently as 1989 as part of an effort by the Mennonite Church and the Collective for Conscientious Objection (COC). The biggest accomplishment by these two groups was their push to have the right to “Freedom of Conscience” included in the 1991 Colombian Constitution. The movement gradually secularized, and in 2000 individuals and entities such as COC, Just Peace, Colombian Working Youth, and the Foundation Growing Unity formed the Collective Action for Conscientious Objection in Colombia (ACOCC).

The present day ACOOC was created in 2009 as an organization focused on strategy and advocacy in its work toward the demilitarization of society and addressing the recruitment of youth by armed actors. In the same year, ACOOC, in coordination with the Swedish organization CIVIS and the Public Interest Group of the University of the Andes, played a large role in the decision by the Colombian Constitutional Court to ratify the fundamental right to object to military service for reasons of conscience. Despite the work of ACOOC and other organizations and networks throughout the country, the ideology and practice of conscientious objection are still largely unknown by the civilian population, and therefore widely unrecognized and often denied by the military.

While we waited to meet with the Lieutenant Colonel of the 18th Airborne Cavalry, we had a few minutes with Jefferson. The two members of ACOOC only had time to ask him some brief questions, trying quickly to assess his condition and the treatment he has been receiving. He responded quietly and calmly, fully aware of the military official in the room. As he had reported in previous phone conversations, he was receiving constant pressure from his superiors and fellow recruits. Once he was woken by his superiors at 3 am, and then made to put on his uniform and sit in a room while being told to abandon his convictions due to all the benefits of being a soldier. His fellow recruits were being made to perform harder exercises as punishment for his behavior. Jefferson had attempted to turn in his uniform and weapon as a way of protest, but he was refused.

As our meeting began with the Lieutenant Colonel, additional military personnel entered the room. Unlike with many of Colombia’s brigades, he was aware of conscientious objection. However, he was quick to point out the fact that Colombia does not have any legislation or laws in place that protect this right. The 2009 Sentence C-728 of the Colombian Constitutional Court determined that conscientious objection is a fundamental right derived by articles 18 and 19 of the Colombian Constitution, which guarantee the liberty of conscience, religion, and worship. Furthermore, Colombia signed the UN Universal Declaration on Human Rights, which served as the basis for the UN’s official recognition of the right of conscientious objection to military service. However, despite these measures, the Colombian government has yet to pass any legislation making this right a law.

Therefore, each case largely depends on the high-level military officials in charge of a specific Battalion and Brigade, who each have varying levels of sensitivity to national and international pressure. At the meeting, one of the majors present was quick to grasp the importance of the case for both sides. “I know what you want to do. You want to establish jurisprudence to use in other cases. We won’t permit that. We will not lose.” By highlighting the lack of protection by law, they can try to make this legal process as long and difficult as possible. ACOOC is up for the challenge, and is dedicated to getting Jefferson released. On July 9, they submitted a tutela, or writ of protection, as an official step to start the judicial process. While both sides wait for the results of the petition, ACOOC has issued an official statement, and FOR Peace Presence has been working with our international base and political networks to bring attention and support to the case of Jefferson.

As the meeting neared an end, ACOOC voiced concerns about the pressure Jefferson is receiving by superiors and fellow recruits for his convictions, but the military officials were quick to dismiss them. A final request was also made to bear witness, along with the FOR Peace Presence accompaniers, to Jefferson turning in his weapon. But as officials explained earlier, “Weapons are the responsibility of the soldier… Jefferson was declared a soldier as of his 10th day.” For the first time in the meeting, the Lieutenant Coronel addressed Jefferson directly: “Let’s say there are enemy forces firing on us in this room. As they get nearer, what do you do?” His response was met by surprised silence, quickly followed by disapproving looks: “I would hide.”

His answer only serves to prove what ACOOC and Jefferson himself have been saying. What use to the army is an individual who does not want to use a weapon, participate in, or support any kind of military action? Jefferson is just one out of countless unknown cases throughout the country, almost all of which lack any kind of legal counsel or representation. Until Colombia’s legislation catches up with its own court rulings and support for the UN’s international declarations, its young men who oppose war and violence will continue to be forcibly recruited, uniformed, and armed. And organizations like ACOOC will continue having to navigate the murky waters of Colombian justice.

For additional information about Jefferson Acosta’s case, or to learn more about conscientious objection in Colombia, please read about Our Partners or contact bogota@peacepresence.org.