Communities in Colombia are standing up to multinational mining companies displacing them from their land. Cerrejón Coal, which operates the biggest open-cast coal mine in Latin America, is owned by three of the richest mining companies in the world. Yet their activities are devastating the lives of people in the area, who are seeing few benefits from the mine’s presence.  Please take two minutes to join us in writing to them.

The message to the companies that own the Cerrejón mine can be sent off here – enter your details, click next and your email will be sent. We will also send the message to Colombian embassies in Australia, Canada, Ireland, the UK and the US.

Communities in northern Colombia have been pushed off their land to make way for the mine. After years of struggle and solidarity, Cerrejón Coal now builds new settlements when villages are moved, but still refuses to provide sufficient land for families to continue their agricultural livelihoods. The small grants it gives people to start new livelihoods have failed because the work most people know is farming. People are struggling with health effects and many communities have been left with barely enough water to drink. Meanwhile, the company continues to fail on its promises to the communities. On August 9, indigenous communities in Colombia will join together to commemorate the brutal eviction of the community of Tabaco. They were expelled from their land by armed police and security guards on 9 August 2001 so that the mine could expand. In the days before this, communities affected by the mine will join together to hold their own ‘people’s consultation’ about the mine. Around the world, people will be standing in solidarity with them.Please join us in writing to the multinational companies which own the Cerrejón  mine and the Colombian government (via their embassy) to say you stand in solidarity with the people affected by the mine.This action is supported by: 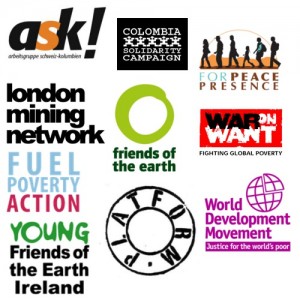