Upon Return from Buenaventura

Over a week ago we were “Leaving for Buenaventura”, to accompany in the Humanitarian Space of Puente Nayero. This write-up is meant to serve as a follow-up. 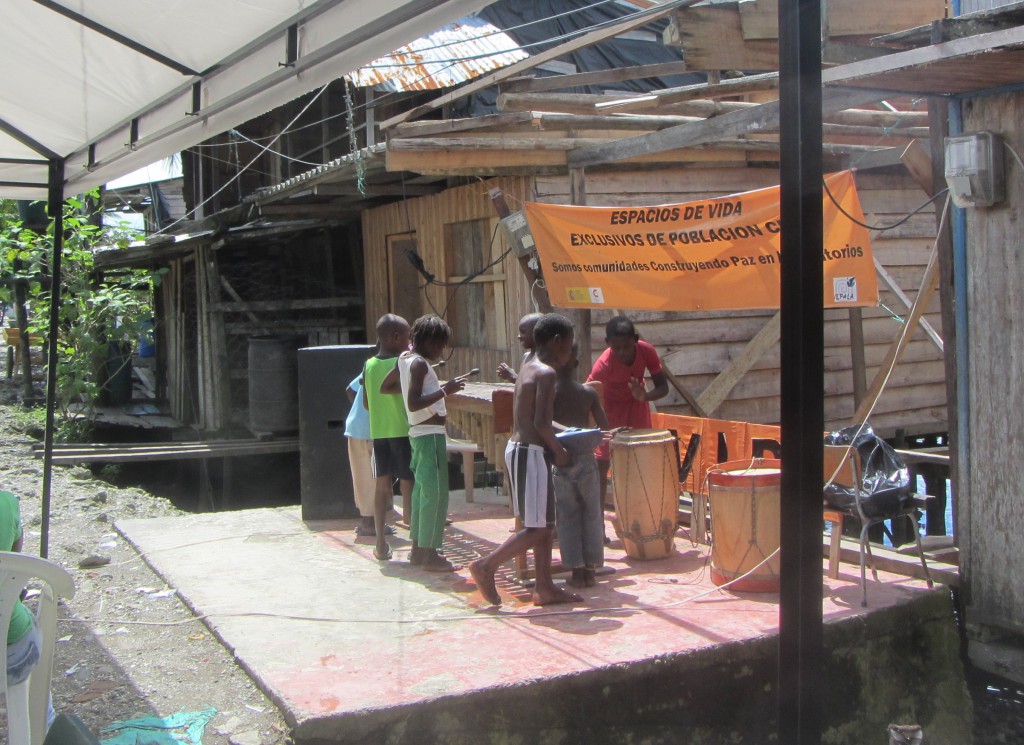 As political accompaniers, sometimes we remark on the fact that we work out of a “constant state of crisis.” We turn to each other knowingly in the field or office when a so called “security situation” arises or when logistical details quickly change, and we’re required to make a set of well thought out but rapid-fire decisions about what to do next. Traveling as much as we do, a crisis might also mean running out of toilet paper on a 20-hour bus trip. Regardless of the impetus, it comes with the job. We are present to react and respond. Being able to stay calm and sort through what needs immediate action, what does not, and what to do next, is something that one learns more and more as time goes on. But if we as accompaniers often find ourselves in this state, it is only a reflection of the fact that the Colombian organizations and communities we accompany in the field are living this reality. They have made a conscious choice to put their lives on the line in order to defend their basic human rights – as a mechanism for survival, and as a means for transformative change. This is the situation in which leaders of the Humanitarian Space of Buenaventura and the Commission of Justice and Peace find themselves.

Accompanying in Buenaventura means responding in a city where ‘constant state of crisis’ is no understatement for those who live there. The region of Valle de Cauca, and in particular its capital Cali, have been penned the “epicenter of Colombian organized crime” The Urabeños and Rastrojos (two of the largest and most powerful paramilitary groups in Colombia), and the FARC guerilla group have a hold on the department of Valle, and in Buenaventura, neo-paramilitary heads have found relative impunity under the half-watchful eye of the Police and Army. When international attention turned to the zone and its countless disappearances and violent homicides at the end of 2013, national security forces amped up their militarization of the city in March, 2014 , as was ordered by the Minister of Defense. Official Homicide rates have since gone down, but violent events still continue at an alarming rate. Of particular concern to us, and a focus in this past visit’s meetings, are the continued threats to members of the Humanitarian Space of Puente Nayero where we accompany (who are now protected by measures from the Inter-American Commission on Human Rights), and the fact that Buenaventura’s “chop houses” continue operating, particularly in the neo-paramilitary stronghold Alfonzo Lopez which neighbors the Space. Facts about these cases were made public in a December denouncement by the Interecleasial Justice and Peace Comission, whom we accompany in the region.

Why do we do political work?

During the first visit to Buenaventura in 2015, FOR Peace Presence had meetings with the head colonel of the Buenaventura Metropolitan Police and with the Defensoría del Pueblo, which functions as an office of citizen protection. Beyond our physical presence in the Space and with human rights defenders we accompany, these meetings allow us to collect information on recent events, make visible the issues faced by our Colombian partners, and hold entities accountable for what they have agreed to do to protect the civil population, and in the case of the Humanitarian Space, what they are obligated to do by IACHR Prevention Measures granted in September of 2014. As one can see from our last Monthly Update, we meet with an array of local, national and international entities every six months, or sooner when an urgent situation arises, to maintain open lines of communication. We also meet to make it clear that our international networks of support – and their networks – are attentive to these entities’ actions, and sometimes to their inaction – this time, around the incidents that we highlighted in our last post.

Standing alongside a Community

Political meetings are an invaluable part of this work, but we draw inspiration from the communities we work alongside – spending time with them, sharing stories and learning how they got to where they are, is what I will take away with me when I leave Colombia.

Over the past many months, accompanying in the Humanitarian Space has also included singing and dancing celebrations, witnessing community assemblies, and the telling of a collective history of displacement and resistance. A large majority of the community comes from the Naya River region, and many were displaced by violent conflict that marred the 1990s in this area.

This community is made up of fathers, mothers, brothers, sisters and children that have an active commitment to their survival and self-protection, and thus, to a Humanitarian Space free of violence, illegal conduct, and armed activities – something uncommon for the region. There’s still a long, difficult road to traverse – generations of violence by local neo-paramilitary groups and the terrorization of the civil population translates into intense fear and difficulty when insisting, especially to well-known, dangerous paramilitary members, that they leave the Space. But they also gain more strength as time goes on, and we as FOR Peace Presence will continue accompanying in support these communities. If you would like to stand with us in this struggle, we urge you to consider donating to our organization as we work to protect human rights defenders and amplify and visibilize nonviolent, grass-root alternatives to systemic violence in Colombia.