On March 22, during the general debate following the United Nations High Commissioner for Human Rights’ report on the situation of Human Rights in Colombia, Martina Lanza from IFOR delivered a statement that spoke to the experiences of its members in Colombia. 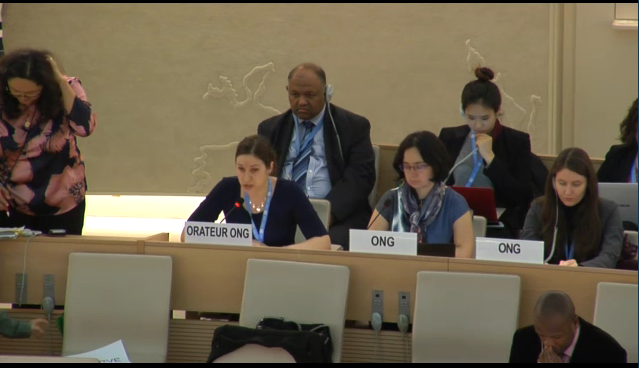 Click on the picture to watch the video – Chapter 5

The International Fellowship of Reconciliation (IFOR) welcomes the annual report of the High Commissioner on the situation of human rights in Colombia.

Our member organisation, the FOR Peace Presence sends disturbing reports that armed criminal gangs, former members of the AUC paramilitaries, are stepping in to the power vacuum left as the FARC guerrillas demobilise. On several recent occasions the weapon-free zone declared by the peace community of San José de Apartadó has been violated.

We share the High Commissioner’s concern about threats, attacks and murders of human rights defenders, which have continued unabated since the peace agreement.

So far there is no sign that the end of hostilities will end Colombia’s reliance on a massive conscript army. In this context, it is essential that effective measures be taken to guarantee the right of conscientious objection to military service, which, as the Constitutional Court has recognised, Colombia is obliged to honour under its international treaty obligations.

It is not satisfactory that in the absence of proper procedures individual conscientious objectors must have recourse to the courts to obtain their release from military service, sometimes after forced recruitment in the notorious batidas, which still take place.

IFOR calls upon the Colombian authorities to take strenuous action to ensure what the peace agreement calls a paz duradura, entailing a complete disarmament and demilitarisation of the country.