David and Goliath; Campesinos confront the might of the State 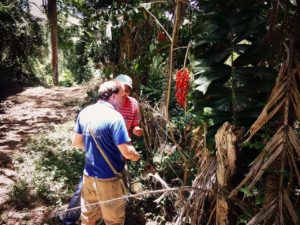 As a member of the FORPP staff, the majority of my time is spent ‘tras bambolinas’ – behind the scenes. However, over the last couple of months, circumstances offered an opportunity to attend a hearing at the Colombian Inspector General’s Bogotá HQ, about the situation pertaining to campesinos (small farmers) of the Nilo municipality, followed up a few weeks later by a day trip to their lands.

A little bit of background. Nilo municipality lies a few hours south-west of Bogotá. One boards the bus in the chilly capital, and alights in the scorching heat of the Cundinamarca region. The neighbouring town – Melgar – is known locally as ‘swimming-pool-city’ for its plethora of hotels, accommodating others escaping the hustle and bustle for a few days. However, these two municipalities, Nilo and Melgar, are also heavily dependent on the Colombian armed forces for their way of life. Melgar is home to a significant air force base, while Tolemaida, an army training school with strong links to the US military, lies within Nilo’s borders.

The campesinos whom FORPP accompanies live in three ‘veredas’ (rural sub-districts) of Nilo: La Yucala, Mesa Baja and Naranjala. Their lands are fertile, more than adequate for the subsistence lifestyle that they have led for generations. Nonetheless, the presence of the army base encroached markedly onto this way of life. For many years they experienced hostile attitudes from soldiers who sought to cut off access routes, and were considered troublesome by the authorities for insisting on remaining in their homes and on their lands.

The situation took a significant turn in mid-2013, when an ‘action for protection’ (acción de tutela, in Spanish) in their name was heard by the Council of State. The sentence mandated the State to accord ‘the fundamental rights of dignified conditions and human dignity’ to the campesinos of the veredas, and ordered the Inspector General’s Office to facilitate a conciliatory process between interested parties (principally the campesinos and their lawyers from the Yida Castro lawyers’ collective, and the Ministry of Defence; but also the municipal authorities, the Human Rights’ Ombudsman, the regional development agency and the Environment Ministry).

This was a game-changer, but four years on the case has not reached a conclusion. I attended the latest hearing in mid-August. Whilst all parties are in theory working towards the same goal, it was difficult to avoid the sensation that the process itself had become a tool for parts of the State to drag things out and avoid delivering any concrete commitments. One example from the hearing should suffice: we heard that a census had been carried out by the municipal ombudsman, according to a methodology agreed by all sides at a previous session. But the representatives from the Ministry of Defence queried that methodology and insisted the census be re-run, so as their representatives might actively participate. That attempt to delay the process was thrown out, but it was striking nonetheless.

Noteworthy, too, was the vocabulary used; most parties present referred to the campesinos as ‘residents’, but the Defence Ministry representatives preferred the more provocative term ‘occupiers’ (despite the fact that the farming families were present in these veredas long before the army base appeared). Nonetheless, even the humanity of the one of those representatives shone through, albeit unexpectedly, when she slipped away from the script by accident, and also referred to the ‘residents’. In the end, despite having been treated as a nuisance, the community leaders had come prepared with a compromise proposal, which would involve giving up one of their veredas in exchange for swift and full restoration of all their other rights. This is now being examined by all the parties.

The campesinos have extended an open invitation to FOR accompaniers to visit their territories, and in September I joined our new Programme Coordinator, Irene Benítez from Vienna, who was on a day trip to familiarise herself with the community. Yaircinio, one of the leaders, met us and took us around their lands, pointing out that the international accompaniment of FORPP had proved to be an extra level of protection, alongside the judicial cover afforded by the sentence. He noted improvements – the local soldiers have generally ceased to insult and harass the campesinos since the judgement. We asked ourselves why it took one of the highest organs of the Colombian apparatus to secure basic human respect. Access points are still a bone of contention between the parties, but the log-jam is now at the level of the conciliation process.

This story has all the hallmarks of a David-and-Goliath situation. Small farmers are up against the might of the State, the same entity charged with guaranteeing their dignity. While urgently seeking a resolution to their circumstances, they appear to bear no grudge towards the army, although question the continued necessity of such a large training base in a supposedly post-conflict scenario. We are proud to support them; our periodic presence on the ground and also at the hearings is a sign that, as in other places we accompany, the David’s of this country are not forgotten. FORPP’s mission, to support initiatives for land, life and dignity in the face of a militarised culture, finds a perfect expression in the struggle of the Nilo campesinos. We will be meeting with the community’s lawyers in the coming month, in order to prepare a submission to the Inter-American Commission on Human Rights, as we did in 2014. If you would like to learn more, one of the videos from our ‘Longing for Peace’ series from last year features the Nilo community.