Interview with Enrique Chimonja Coy, “Defender of the Year”

“A human rights defender is someone who consciously acts on their profound sensitivity for life, and who does it in act of love and commitment for the lives of others.” 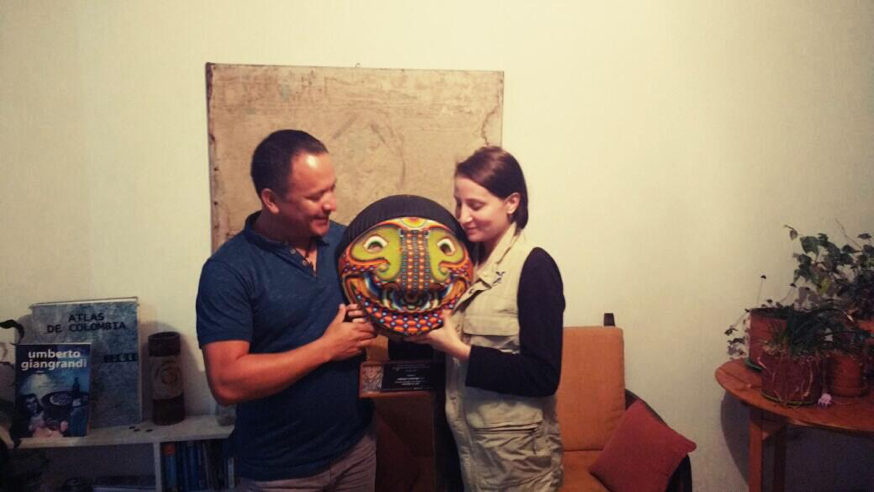 Since 2014, FORPP has accompanied Human Rights activist Enrique Chimonja Coy, member of the Intereclesial Commission of Justice and Peace. We accompany him to the city of Buenaventura and in the rivers of San Juan, Calima, and Naya, home to indigenous and afro-descendent communities who are survivors of the armed conflict.

On September 19, 2017 Enrique was selected as the “Defender of the Year” by Diakonin and the Swedish Church, where he received the “National Prize for the Defence of Human Rights in Colombia,” with an emotional speech you can see here.

The awards also included other categories, such as “All One Life,” awarded to the activist Socorro Aceros Bautista, and “Collective Experience of the Year,” given to the Association Sütsuin Jiyeyu Wayuu of Guajira and to CREDHOS.

What follows is the story of “Kique,” as Enrique Chimonga Choy is known to his friends, but it also could be the story of so many other human rights defenders and activists in Colombia.

FORPP: How did you become a human rights defender? What was your journey like?

Enrique: I am from the south of Huila, the area of the Colombian Massif (the Andes in South Central Colombia). My family were farmers with origins from the indigenous community Yanacona.

For the past 24 years, I have worked defending life and land. When I was 10 years old, I began to understand what type of country I was living in: on September 3, 1983, my father was abducted and, from a young age, I took on the challenge of trying to create a country at peace, where disappearances didn’t occur. My family and I have spent many years looking for my father and asking for the truth to be clarified, but only with the Peace Accords has the Colombian State committed to addressing the question of forced disappearances. That was the first time that I began to understand that we—rural, indigenous, farmer and afro-descendent communities—are vulnerable, because we inhabit territories that are very attractive, such as those of Huila and Cauca.

The second event that impacted my trajectory in life has to do with a very painful moment in the history of our country, the genocide that the Colombian State perpetrated against the Union Patriotica (the Patriotic Union, a political party), in which the lives of more than 6,000 people ended.

The beginning of this bloodbath was in my town on October 11, 1985, in the municipality of Palestina, the village of Tabor, next to our family´s home. On that occasion my uncle, my mother´s brother, was killed along with four farmers. My family was forced to displace to the more urban part of the municipality. That made us experience State violence and understand forced displacement as a crime against humanity.

After those two events, I had a profound need to search for a space to support the construction of a different country, one where no one would have to experience what we had lived through as a family. It was just a dream at that time. I felt even more attached to my land, my ties to community and, above all, my family. Their value grows each day and remains fundamental in my life as the reason behind my social and political fight.

FORPP: Tell us about how you began to work with the Intereclesial Commission of Justice and Peace, who you continue to work with today throughout various regions of the country, and your work with FOR Peace Presence.

Enrique: After those events in my youth, I continued my studies and I looked for a path to defend human rights, including in the ecclesial world. I had the chance to be linked to the religious life for seven years with a missionary community, the Passionist Community, in Santander, Antioquia, and Bogotá. With them I traveled often to rural communities, doing pastoral work from the gospel. This experience shaped me to work with vulnerable communities.
Later, when I was 21 years old and still religious, I met the Intereclesial Commission of Justice and Peace with whom I have worked to support communities and resistance movements. Above all, I began to focus on finding ways to support the principle of territorial distinction and protection in the face of the damages of agro-business.

With FOR Peace Presence, we have designed and carried out a process, especially in the Valle del Cauca, and in particular the humanitarian spaces of Buenaventura and the rural pacific region, where indigenous and afro-descendent communities continue to stand up for their rights during this historic moment in Colombia. Today, we are attentive to the start of the peace process with the ELN, and hope that neo-paramilitary structures, such as the AGC, will begin a disarmament process as well.

FOR: How would you define a “human rights defender?”

Enrique: It is someone who consciously acts on their profound sensitivity for life, and who does it in act of love and commitment for the lives of others.

FOR: According to the organization Diakonia, the award is necessary because “these defenders (of human rights) continue to face aggressions directed to block or debilitate their human rights work. Attacks against human rights defenders reveal a structural pattern and have a large case file in the annual register of human rights violations. The impunity of these aggressions is close to 100%.” What can you tell us about that?

Enrique: That peace has its costs.

For certain sectors of society, war is very profitable. These sectors experience impunity from their responsibility in the development of the armed conflict, or where they have benefited from it. Secondly, we are talking about a territory rich in natural resources and which is found in a scenario where economic interests are being consolidated. Communities in the region are living through real change. Business and economic interests are taking over national territory in conjunction with drug trafficking and extractive economies, which the neoliberal model is imposing on these territories and all of Colombia. It is for this reason that threats against human rights defenders continue, especially because we have been protagonists in the peace process. This needs to be made visible, and we need the support of the international community.

Enrique: The most important thing is public recognition from the State and recognition of the work that we do! It is fundamental that this symbolic act bring greater international support, and that it makes the struggles of so many communities that are building peace visible, and affirms human rights for many years.