On Friday January 29th and Saturday January 30th, the human rights defender María Eugenia Mosquera was threatened by Whatsapp for the second time, while she was in Buenaventura with representatives from Fellowship of Reconciliation (FOR) Peace Presence, Fellowship of Reconciliation Austria, and Witness for Peace Solidarity Collective. She received Whatsapp messages to her personal cellphone from the number +57 317-694-3450 between 1:40 PM and 7:16 PM on Friday and another message on 12:33 PM Saturday.

On this occasion the assailant wrote, “look we need to talk with you, you know the problem you have with us,” later saying, “We are the ones who kill informant toads of those other people” and “That’s why I’m asking you if you’re with weird people.” María Eugenia immediately contacted the national police and the Public Prosecutor’s office and passed them information about the messages. Four hours after this, she received next texts, “look you want a problem, you’re giving my number to other people, so you want a problem with us.” The assailant then changed tactics to appear as if they were practicing extortion, “look we need a million pesos. . . or your family has a problem, don’t mess this up and take care of your family” and then “you’re talking about this silly thing, if you don’t want to help fine.”

On Saturday January 30th, they sent another message, “your family time is up, you messed up they won’t see you again.” 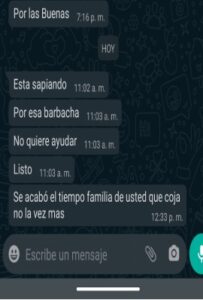 This is the second time in the last month that María Eugenia has received threats by whatsapp, the first from a different cellphone number. On the first occasion on January 7th of this year, they wrote, “don’t let yourself mess this up, you went and talked, that is unforgivable. For more, please see our earlier report, https://peacepresence.org/2021/01/10/threats-against-accompanier-and-human-rights-defender-maria-eugenia/

Maru, as she is known in human rights circles, belongs to the accompaniment team of FOR Peace Presence, as well as to the National Ethnic Coordination of Peace – CENPAZ; she is also a participate on the Peacebuilding and Nonviolence Committee of the Great Alliance CONVIDA 20. She is currently the legal representative of the Association of Communities Building Peace in Colombia- CONPAZCOL.

The new threats occurred while the human rights defender, together with delegates from the FOR Peace Presence, the Fellowship of Reconciliation Austria and the Witness For Peace Solidarity Collective from the United States, carried out an international accompaniment of ethnic processes in the urban area of Buenaventura, after returning from the Naya River.