Buenaventura- A city and its people who cannot be silenced 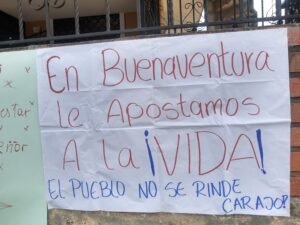 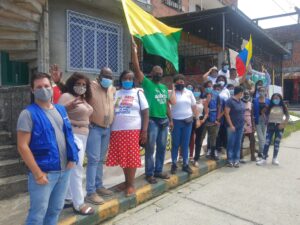 Together with Enrique Chimonja, María Eugenia has been working as a human rights defender in the Colombian Pacific, mainly in the port city of Buenaventura and the surrounding district, for more than 10 years.

FOR Peace Presence started accompanying Maru, as we call Maria Eugenia, and Enrique in Buenaventura in 2014. While the peace negotiations between the then guerrilla group FARC-EP and the Colombian government in Havana were progressing, Buenaventura, the port city with one of Colombia’s largest export ports, experienced a new wave of violence. The state responded with a wave of militarization. It wasn’t the first wave of militarization. This city with its more than 400,000 inhabitants has been one of the most dangerous cities in the world for many years. 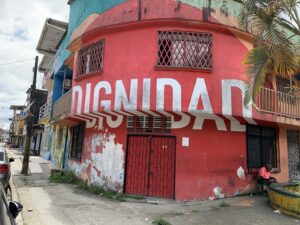 At the same time, grassroots initiatives were looking for new ways to break out of the spiral of violence in 2014. Maru, together with Enrique, was a leading force in 2014 when the residents of Puente Nayero, a small neighborhood in the city, organized against the excessive violence and control of armed groups. More than 1000 residents of the district, who had built their stilt houses on a street reaching into the sea, proclaimed themselves the Puente Nayero Humanitarian Space. Members of armed groups – successor paramilitary groups – were “kicked out” of the Humanitarian Space. Public Colombian security forces were asked to protect the entry points of the space. Together with other international accompaniment organizations, FOR Peace Presence accompanied Maru and Enrique repeatedly in this humanitarian space for several years.

In 2021 we are again accompanying in Buenaventura, which has been experiencing a new wave of visible, direct, physical violence since the end of 2020. The atmosphere is tense. From the beginning of 2021 to the beginning of February there are said to be more than 4,000 displaced persons, 50 murdered and up to 20 disappeared. Some disturbing patterns of violence, including the dismemberment of victims, appears to be on the rise again. There are also dozens of human rights defenders who have received threats, including Maru. At the beginning of January this year she received several threatening messages on her mobile phone.

On the recent trip at the end of January, FOR Austria, FOR Peace Presence, Witness for Peace Solidarity Collective and CONPAZ-COL travelled together, as the threats were suspected to be connected to Maru’s current commitments in Buenaventura. The accompaniment allows for Maru to continue her engagement in Buenaventura. Maru and Enrique have been with FOR Peace Presence since 2019 and over the last year they have mainly dedicated their work to the grassroots processes of Buenaventura. They support various peace platforms, which oppose the recruitment of young people by armed groups. They also accompany the land restitution process of the displaced community of La Esperanza, the Afro-Colombian community of the Naya River and the  Puente Nayero Humanitarian Space. 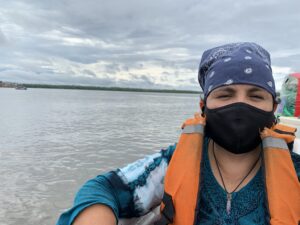 (Maru traveling in the Naya River) 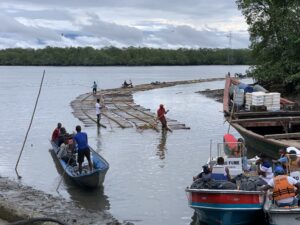 (Docking in the Naya River)

At the beginning of the trip, we went to visit the communities on the Naya River in the Buenaventura district. As part of the peace treaty, which was signed in 2016, a Truth Commission was set up to help document the history of the Colombian conflict over the past 50 years. The population of the Naya River suffered from the conflict for many years, and to this day many of its members are still reported as disappeared. During the trip, testimonies for the Truth Commission were collected from the Afrocolombian communities who live in the Naya River basin. It is a delicate task. Even after the signing of the Peace Accords in 2016, at least 5 people from these communities have been disappeared. After two days in the river basin, we returned to the town of Buenaventura. 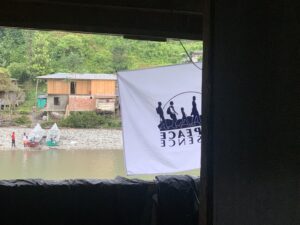 (Views from the Naya)

There we visit several urban grassroots initiatives, including the Puente Nayero Humanitarian Space. We met old friends and we could sense the concern about the new wave of violence. During one of these visits, Maru received again threatening messages on her cell phone: Her time was up because she opened her mouth. 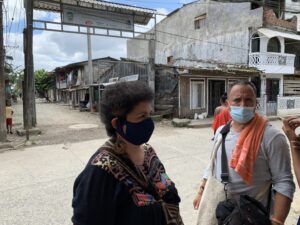 The causes of this new wave of violence are not all that new. They are reminiscent of 2014 and include a strong, continuous effort to silence human rights defenders like Maru.

The neighborhoods that have direct access to the sea are most affected by the violence. Displacements in these neighborhoods are increasing. This goes hand in hand with port expansion projects that are in the pipeline, such as a liquefied gas port and the expansion of areas for container ships and containers. These problems are not new, and the container port of Buenaventura is in the spotlight for the free trade agreements in play between the European Union and Colombia as well as the USA and Colombia. The illegal armed groups that are currently fighting each other in Buenaventura have changed over time but can be traced back to paramilitary structures that came to the Pacific region over 20 years ago. In a recent interview, the mayor of Buenaventura confirmed that the “gangs,” as some call the armed groups in Buenaventura, belong to the nationally operating illegal armed paramilitary group AGC, also known as the “Clan del Golfo,” which also controls drug trafficking.

Huge amounts of chemicals used in drug manufacturing, weapons and drugs themselves have been traded through Buenaventura for years. All of this in one of the most highly militarized zones in Latin America. With respect to this overlap, one of the main negotiators of the Peace Accords of 2016 recently said that he could only imagine an effective implementation of the peace treaties on the Pacific coast if the house was cleaned up, i.e. if corruption was halted.

Once again, we leave Buenaventura with an uneasy feeling. Still, under the apparent silence we could feel how nonviolent resistance was beginning to form and how various self-protection strategies were being discussed. 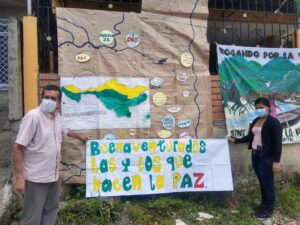 A week after our visit, almost 1000 young people from Buenaventura, accompanied by several solidarity rallies in other Colombian cities, daring to protest together and blocking a key traffic point. With the hashtag #SOSBuenaventura, they demand that violence be stopped.

And – nonviolence is contagious. A few days later, a 22 km long human chain of over 80,000 people calling for an end to the violence passed through Buenaventura.