The Peace Community: 24 Years of an Uphill Battle and Still More to Climb

The text for this post was originally written by our friends at FOR Austria, Michaela Söllinger and Irmgard Ehrenberger for a an article in German. It has been adapted and modified with collaboration from them.

On March 23rd, the Peace Community of San José de Apartadó celebrated its 24th anniversary. Since 1997 the small farming community in the Urabá region in northwest Antioquia has been fighting for their right to life, land and dignity.

The Peace Community celebrated their anniversary with music, dancing, and a large feast with their guests to uplift their community and preserve their collective historical memory, both joyous and tragic. 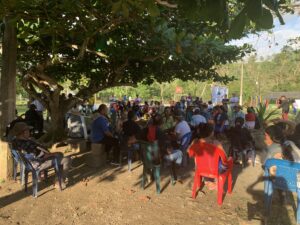 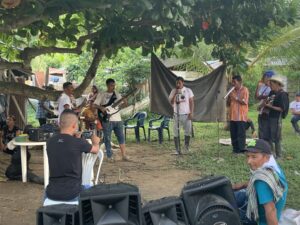 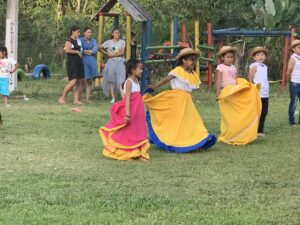 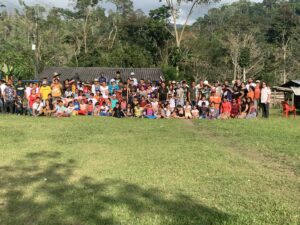 This year, the celebrations also focused on the topic of “corn” in the community’s collective memory of murdered small farmers in the region. The Peace Community organized a Feria de Maíz to showcase the native crops grown in their region and the different ways that they implement traditional and ecological farming practices. This event underlined their identity as farmers with sustainable and climate-friendly practices of organic cultivation. The Peace Community emphasizes that the right to life must go hand in hand with the right to own seeds, including their own native corn seeds. Latin America is inundated with genetically modified, non-reproductive seeds, and old, reproductive varieties are in short supply. On this birthday, the Peace Community also celebrates the diversity of its own reproducing seeds. 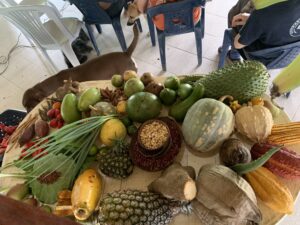 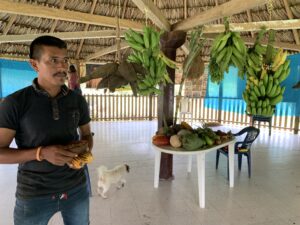 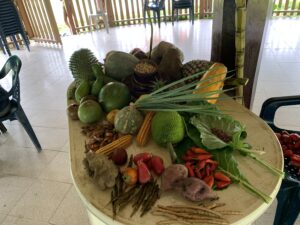 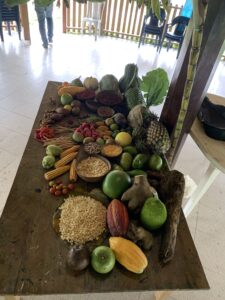 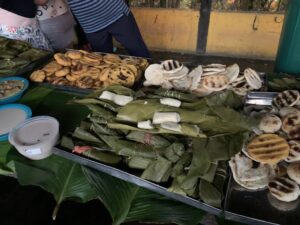 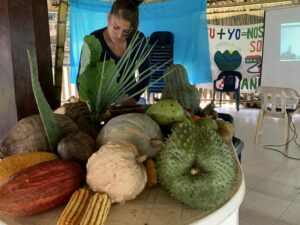 In order for the corn to grow, the seed needs fertile soil. Four years after the conclusion of the peace treaty between the Colombian government and the FARC guerrillas, one would think that the community can live in peace. But that is a mistake – the practice of implementing the land restitution process could be the doom of the community. In San José, where the peace community is located, almost all properties are involved in land restitution processes that are supposed to give back their land to the forcibly displaced, often several families claim the same property. Lands that the Peace Community farms collectively are also affected. Victims of the war (the displaced owners) could now make victims of other victims of the war (the members of the Peace Community) again and again.

During the 24th anniversary, the Peace Community organized a march to honor their martyrs and demonstrate their continued commitment to nonviolence and collective living. Many community members marched with photos of loved ones who had been killed in the conflict and related violence. The march reminded us of the various ways the community has been victimized by this conflict, and the ways they may be victimized again. 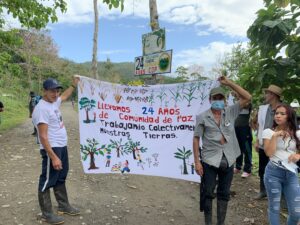 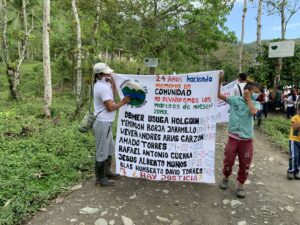 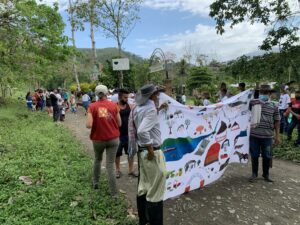 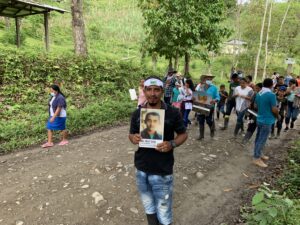 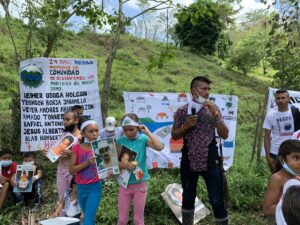 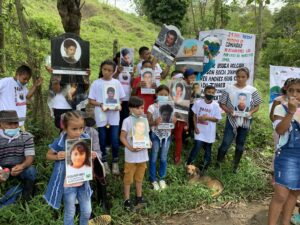 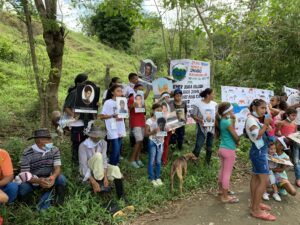 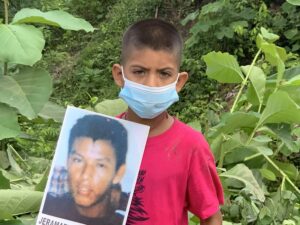 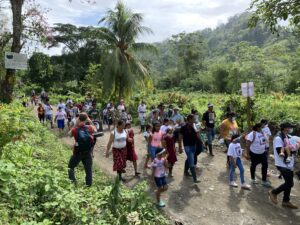 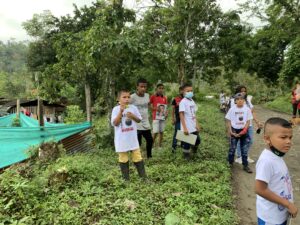 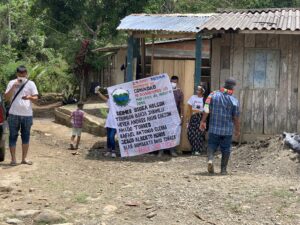 If not carried out properly, the land restitution processes could keep the cycle of violence turning endlessly. Was that the intention of the peace treaty? It can be assumed that a sensible land reform would help to resolve these conflicts, but there seems to be a lack of political will to do so. The fact that José Augusto Rendón García was appointed Ombudsman for the Urabá region in March is another affront to the Peace Community and many other displaced persons in the region. García had previously represented the Jaramillo family, who claimed for themselves the lands that the Peace Community had lived on for 23 years. His impartiality can be questioned. The Jaramillo family is now represented by García’s wife.

The specific plot of land has already been vital for the Peace Community several times, as it is right next to San Josecito, where most of the members of the Peace Community had fled to from their farms. The proximity made it possible to produce food, at least in groups given the still restricted mobility, which includes corn, yucca, avocados and also a small amount of cacao is grown on the property.

Despite the Peace Accords, the Peace Community also continues to face severe threats from neo-paramilitary groups. They have publicly denounced these human rights violations in its regular communiqués and repeatedly refers to the role of the state military, specifically to the role of the 17th Brigade, which is stationed in the vicinity of the community. In 2018 the 17th Brigade submitted a “tutela” (a writ for the protection of constitutional rights) in which they accused the Peace Community of damaging the brigade’s “good reputation”. The Peace Community has been requested to remove eight of its 2018 communiqués. This is the same military brigade which was involved in the massacre of eight members of the community in 2005.

After much back and forth, the Tutela was revised by the Constitutional Court, which agreed with the 17th Brigade and pronounced a verdict that ignores international and national precedents which prioritize freedom of expression in such cases and not only threatens the freedom of expression, but the work of human rights defenders as such. In its ruling, the Constitutional Court stated that the good name of the Brigade in question was indeed damaged by communiqués from the Peace Community, but then denied the order of the original ruling to remove the communiqués from the Internet. Instead, the Peace Community is urged to refrain from publishing such accusations in its future communiqués as long as there are no legal / judicial convictions against the accused. This request is very strange. It not only represents a restriction on freedom of expression, but also a restriction on the defense of fundamental rights, not only for the Peace Community.

In the case of the Peace Community, one could simply ask: how do the judges know that the 17th Brigade or other military units will not commit any human rights violations in the future and will not cooperate with neo-paramilitary groups? After the 2005 massacre, the Colombian government denied the involvement of the military and the FARC guerrilla was presented as the perpetrator. But the Peace Community published a communiqué about how paramilitaries and the military of the 17th Brigade carried out the massacre together. This allowed national and international pressure to be built up to advance and monitor the investigation of the case. Years later, members of the 17th Brigade were convicted of participating in the 2005 massacre. What would have happened without the communiqué of the Peace Community? The right to truth is a cornerstone on the path to non-repetition of human rights violations. That is why the Peace Community submitted a motion that the Constitutional Court itself should annul this judgment.

In this extremely difficult situation, where the Peace Community is bombarded with physical threats and legal clubs, local support is essential. FOR Austria’s peace worker Michaela Söllinger therefore left Bogotá in December and settled in the city of Apartadó in order to be as close as possible to the communities she accompanies. Michaela, who has been working with the Peace Community for many years, accompanies the community on many occasions. She is not only present at all important festivals and memorial days such as Christmas, the Via Crucis on Good Friday, the anniversary of the 2005 massacre or the anniversary, but also at important dates such as inspections of land with representatives from official bodies as part of the above-mentioned Land restitution requests on site. Or also with the transport of cocoa beans to Europe, which are intended for sale to Lush, which produces cosmetic products from fair and organically grown raw materials. The sale of cocoa beans is the main source of income for the Peace Community and has been ambushed several times. The assassination attempt on the legal representative in 2017 was camouflaged by an alleged attack on the cocoa trading point of the peace community.

Besides the regular visits to the communities, Michaela’s main task is the political support of communities. In numerous meetings with embassies and with representatives of international government organizations such as the Inter-American Court of Justice, the UN High Commissioner for Human Rights, the UN Mission and the Mission of the European Union, she reminds of the devastating situation of human rights in the communities and warns the dangers inherent in pending land restitution processes. The IFOR representative before the United Nations will inform the Special Rapporteur on the promotion and protection of the right to freedom of opinion and expression about the pending decision of the Constitutional Court on the annulment of its own judgment. We also work closely with other international support organizations. A thirteen-page letter with a comprehensive legal argument was sent to the Constitutional Court. The letter was also signed by the Union of Reconciliation and by individuals inside and outside the VB. The Constitutional Court is likely to rule on the motion to annul the judgment in the next few weeks, a landmark moment.  Because other military officers have already followed the example of the 17th Brigade and introduced tutelas against social organizations such as the National Organization of Victims of State Violence (MOVICE), the request of annulation of the ruling is of paramount importance. The aim is to muzzle human rights defense and undermine the right to freedom of expression. Annulling the verdict would curb the tendency to use legal means to silence human rights defenders. As massacres and new threats against human rights defenders continue to rise in Colombia, the government should be focused on protecting and uplifting these vital leaders and peace-builders, not silencing them.