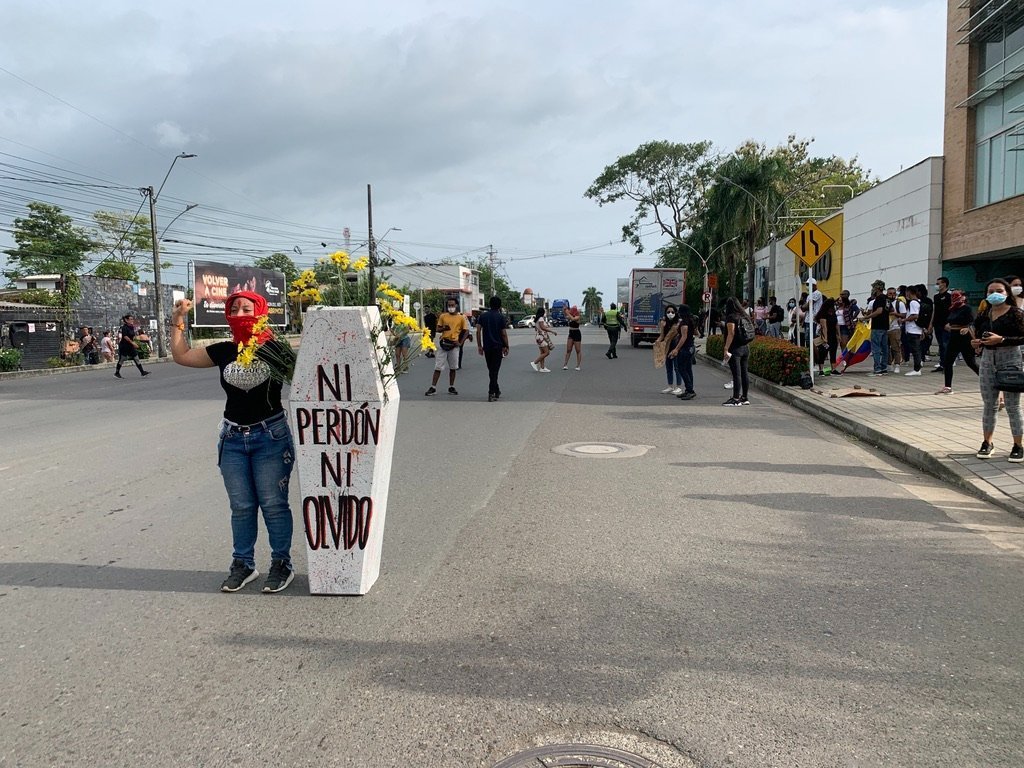 May 20, 2021 | Anti-militarization, Human Rights, Impunity and Justice, News, Our Partners, Peace and Nonviolence 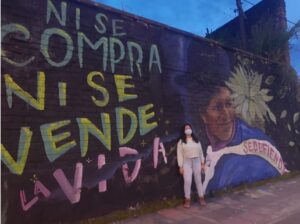 Reflexions from our Field Team

Since last April 28 and during the 23 days of peaceful mobilizations of the Colombian people in the framework of the National Strike, María Eugenia Mosquera and Enrique Chimonja, from the FORPP field team, have participated as citizens and Human Rights Defenders in the concentrations and tours developed in the city of Popayán, Department of Cauca.

We want to start by saying, the drop that overflowed the cup of indignation of the Colombian people was the tax reform proposal that the current government of President Iván Duque wanted to impose but that has as a backdrop the memory of a people that historically has been peaceful, hard-working, fighters and weavers of dignity and freedom, who at this moment understood that they cannot silently resist so much death, so much war, so many conditions of misery, so much corruption and so many violations of rights by governments that have used and continue to use the political power, the legal and constitutional order to oppress and dispossess. We understand that the young people, the thousands, millions of young people who are in the streets, are leading the strike because they are the expression of the striving for peace and reconciliation that have been preserved and created by indigenous territories, Afro-Colombians, peasants, from urban sectors as students and unions, from women, from the LGBTIQ population and especially from the victims of the armed conflict and the victims of development. They’ve made proposals to state institutions, who have not been up to the task to respond. On the contrary, they reinforce an economic model that turns its back to life and peace. 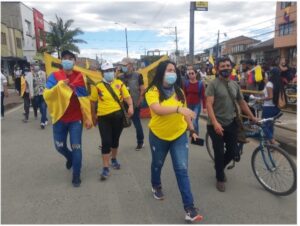 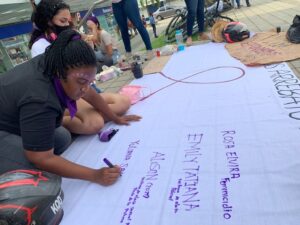 The national strike is the accumulation of years, centuries of resistance, of hope and a search for change.

Just as the force of a river should not be dammed, just as the sunlight cannot be covered with our finger, so we cannot deny the authority of our mother nature, nor can we prevent the awakening of the collective consciousness. The rebirth of hope. The transforming force of love for life, for the territory. It is necessary, it is our duty as inhabitants of the common home, as daughters and sons of Mother Nature, to promote reconciliation with life, and that implies articulation, solidarity, fabric, global unity. We cannot legitimize, let alone celebrate death, imposed on us by an economic model, which leaves economic growth, capital accumulation for a few, as the basis of misery, slavery and the death of millions of human beings and as the basis to strip and erase the biodiversity of our planet. It is urgent to restore, regain trust, legitimacy in the institutions and that will not be achieved, if the level of impunity that reigns in Colombia is not overcome in the face of so much administrative corruption, in the face of so many crimes, in the face of so much death and so much dispossession. 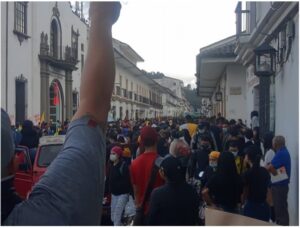 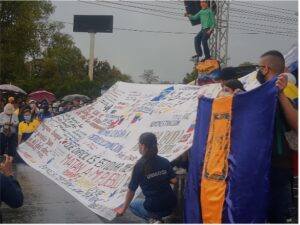 As human rights defenders and as members of the reconciliation movement, we have witnessed the peaceful spirit and non-violent affirmation with which the people and especially young people took to the streets to demand the rejection of the tax, pension, labor and health reforms. However, the criminal and violent response of the State through the police and the ESMAD forces has turned the streets into death camps, torture, disappearances, sexual abuse, stigmatization and prosecution, in a unequal warfare, on one side an armed force with protective suits, helmets, masks, bulletproof vests, helicopters, tanks, trucks, motorcycles, gases, while the youth and the people in crowds defend themselves with their shouts, banners, songs, lids, pans, even having to use the canes of the minga, stones, sticks and much, much moral and political force.

The repression by the state has reached the point of allowing armed civilians or plainclothes police to infiltrate the march, promote vandalism and cowardly murder many marchers. The number of people seriously affected in their life, integrity and other human rights, occurred during the national strike, is: 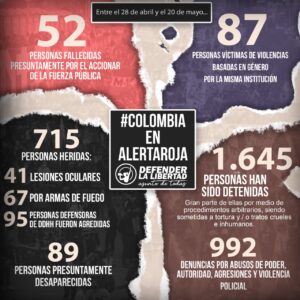 We have participated in the strike as a family, that is, together with our adolescent daughter, as many families have done, encouraged by the peaceful spirit, the legitimate discontent in the face of so many abuses, and the desire to transform Colombia into a country with an effective guarantee of rights for everyone. To date, the participation of children, adolescents and young people, women and the elderly has been overwhelming. The capacity for resistance, the avalanche of creativity, memory, the dreams expressed in painting, theater, songs, messages, is inspiring and liberating, gestures of unity, solidarity and love for a Colombia in dignity. 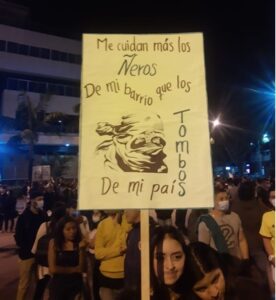 Thanks to the young people who remind us in the streets, that our peoples have been deprived of much, but not the dignity, memory, and strength to be reborn from the ashes and with which we are restored as a human family in harmony with the territory. 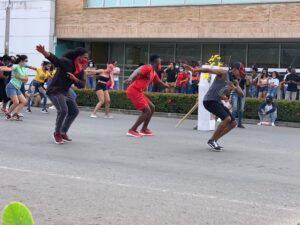 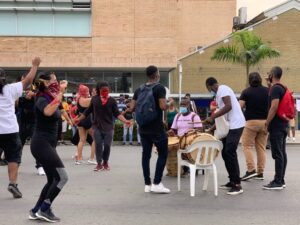 Porque el pueblo no se rinde carajo (Because the people don’t give up, damn it).