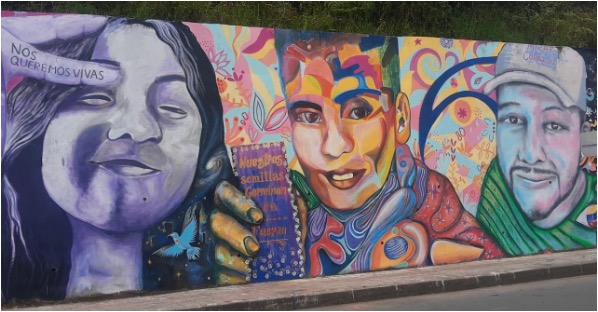 A mural to life, honoring the memory of Alison, Sebastián and Esteban, 3 of the victims of police violence in Popayán, a mural dignifying the resistance of the social and popular minga led by Colombian youth in 31 days of national strike. It was painted by young artists with the participation of the community, in a sector of the capital of Cauca, the result, a work of art made in Minga, full of life, color, strength, unity, love, youth, diversity, territory, harmonization and non-violence. 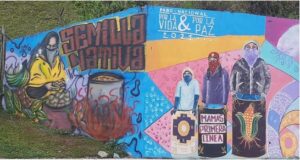 This work to honor dignity and lives turned into seeds, to mothers and young people on the front lines, to the hope of a people marching until dignity becomes custom, is part of the synthesis of 31 days of national strike. It is the expression of the general discontent arising from the attempt of the government of President Iván Duque to impose a regressive tax reform and is part of the structural discontent, the awakening and indignation over the historical social debt with the Colombian people, felt by the millions of young people who experience a present and a tomorrow without a future, one of the contradictions of the neoliberal model that in territories where life, common goods, family and community work abound, inequality, poverty, war and death prevail. 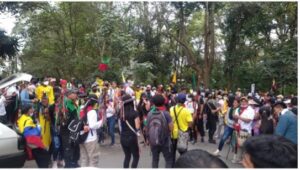 What is happening in Colombia in terms of the violation of Human Rights with the young marchers in the framework of the national strike cannot go unnoticed by the world and especially by the organizations that defend life and territory, as it is the result of a logic of war: of an internal enemy, of criminals, deadly logic used by a government that poses before the world as democratic, but that responds with State terrorism to the mobilization and demands of the people. 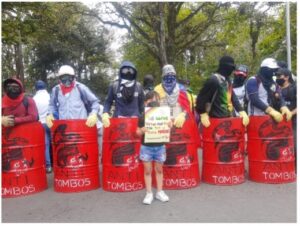 The systematic violation of the human right to peaceful protest, the consummation of crimes against humanity such as the forced disappearance of young people, the rape of girls, the murder of defenseless children and young people, torture and irreparable physical injuries, arbitrary detentions and the stigmatization of the young marchers as terrorists, vandals, and criminals, as well as of recognized social leaders, indigenous leaders and human rights defenders, confirms the tradition of the Colombian State as a historical violator of Human Rights and the consolidation of a pseudo democracy that has avoided the action of international justice, thanks to the levels of impunity guaranteed by the judicial apparatus in Colombia.

As the organizations Indepaz andTemblores have documented, within the framework of the national peaceful protest that has just passed its month anniversary, there is an evident national and international responsibility on the part of the State regarding the systematic violation of Human Rights in decisions made by the national government, headed by President Iván Duque, to respond to just social demands with tactics of war, of an internal enemy, of vandals and terrorists. 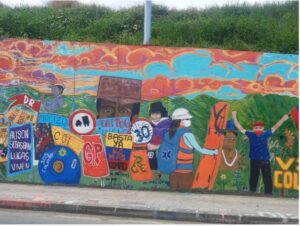 In 31 days of massive and peaceful mobilizations led especially by adolescents and young people with the support of mothers, adults, older adults, indigenous people, Afro-Colombians, peasants, unions, teachers, truck drivers, small and medium businessmen, health personnel, students, people on the streets, unemployed, aware of a present and a tomorrow without a future, without living conditions in dignity, have been repressed by the violent action of the State, leaving as a partial result:

All this as a consequence of the refusal of the national government to prioritize dialogue and as a consequence of the abuse of power, the abuse of authority and the Police violence, abuse of power that would deepen the systematic violation of Human Rights, after the announcement by President Iván Duque of going to the figure of obligatory military assistance to governors and mayors, consolidating a first step to the state of internal commotion, a measure that continues to ratify to Colombia as an authoritarian, undemocratic government violating human rights.

To the humans of the world, in solidarity with reconciliation and the fabric of peace in the world, we continue the cry of SOS to prevent the ongoing genocidal revenge. 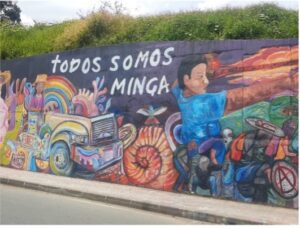