Return to Antioquia: Reflections and Analysis

Written by our field team about their visit to Antioquia July 1-7, 2021. Translated from Spanish. 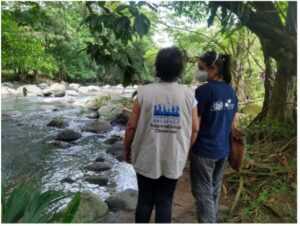 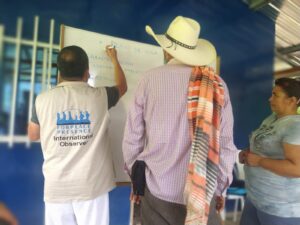 After 16 months of not being able to physically visit FORPP’s accompanied communities and organizations in Antioquia, due to Covid 19, the Colombia team of FORPP and FOR Austria (with permanent presence in the area), carried out a tour for support, listening, context analysis and meeting with authorities in the Urabá region. The accompaniment in Frontino, Dabeiba, Mutatá and Apartadó, was done alongside the Lutheran Church of Colombia (IELCO) in the framework of its project De la Guerra a la Paz (From War To Peace).

What is the Impact of the New Highway and Ports Being Built in the Region? 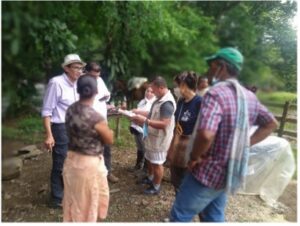 According to the testimonies of transporters and residents of Urabá, for the last year it has taken between 12-16 hours to travel by private or public vehicle from Medellín to the Gulf of Urabá. Why? The reason is the multimillion-dollar expansion and modernization of the route’s infrastructure (new roads, tunnels and viaducts) that ensure access to a global market, that a 18 wheeler truck with imported merchandise or with raw material for export does not take more than 4 hours between the capital of Antioquia and any of the 3 ports of international stature. This growth of global capital is occurring in conjunction with the consolidation of the paramilitary project.

What are the Common Elements of the Current Context in Frontino, San José de León and San José de Apartadó? 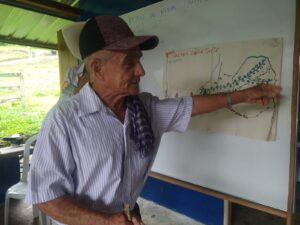 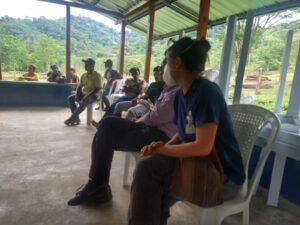 They are territories with clear business interests and projects in mining, agribusiness, extensive cattle ranching and the illegal economy of arms and drug trafficking.

They are geo-strategic territories for the Urabá project, known as “the best corner of America,” and have been historically used for the development of the armed conflict, the military and social control of the population, and the connection between the Andean zone, the Pacific, the Caribbean Sea and Central America.

They are also territories with a strong military presence, which coincides with a strong presence and actions of the paramilitary-type structure (unique in the region) known as Clan del Golfo (Gulf Clan) and the Autodefensas Gaitanistas de Colombia (Gaitanista Self-Defense Forces of Colombia), who impose social control by threatening, dispossessing, recruiting and murdering small-scale farmers and indigenous people.

What are the Differences despite Being the Same Region? 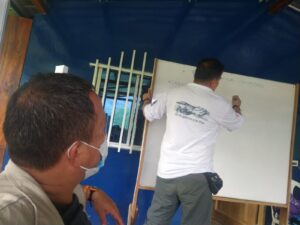 The armed conflict between the State and public forces, the Gulf Clan and the ELN guerrillas intensifies in the FRONTINO – DABEIBA – URRAO – MURRI corridor, where there is installation of antipersonnel mines, the forced recruitment by the two illegal actors, threats, forced displacement and intimidation of the population so they are afraid to report.

In San José de León and San José de Apartadó, the presence and military control is imposed by the public forces and the paramilitaries of the Gulf Clan. They control and define the use of the land, impose environmental regulations, lead the opening of roads, control the drug business (trafficking and micro-trafficking), they control everything.

Despite civil resistance and the existence of community processes with recognition in the region, it is clear that within the process of pacification of Urabá and the consolidation of the region as a pilot project for neoliberal development, the Peace Community has been a stone in their shoe, which is why, with the help of the public forces and businessmen, a campaign has been orchestrated against them. This campaign is accompanied by legal actions such as the demand of the 17th Brigade to silence the Peace Community from denouncing the military in their public communiqués, and the dozens of requests for land restitution  on the properties acquired and protected by the community.

In the township of San José de Apartadó and its villages, the presence of paramilitaries is permanent, as well as cases of increasing forced recruitment, the sale and consumption of illicit substances and restrictions on farming and productive activities of the region’s residents. 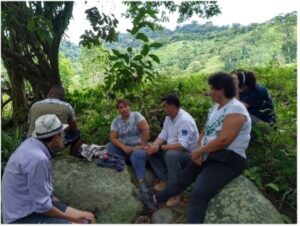 From July 1st-7th we visited the municipalities of the accompanied processes in Antioquia: Frontino, Mutatá and Apartadó.

The context of the region shows the consolidation of the paramilitary project in Urabá and the intensification of the conflict and the non-implementation of the peace agreement in Dabeiba and Frontino.

We continue to work with IELCO and their project De la Guerra a la Paz as it advances in the construction of the rural plan for life in San José de León and with the Plan for Life of the Interethnic Committee in La Blanquita Murrí.

We participated in a day of reconstruction of historical memory and recognition of the territory in San José de León, where we support the advancement of sustainable environmental proposals.

In the Peace Community of San José de Apartado, we were updated on the context, concerns about paramilitary actions, the media and legal campaign against the community, the imposition of norms to limit local productive activities, impose dispossession with disguised discourse in concern for the environment, thus causing a concealed forced displacement. Another aspect of concern is the recruitment of children and adolescents in the San José de Apartado region and the consumption of illicit drugs by this population. The campaign by businessmen to end the peace community is also very worrying.

Injustice and impunity are becoming more powerful, but the community thinks about the new generations and remembers that another world is possible, with the defense of life and territory.

The message from the community is that “we cannot kneel.” They said, “you cannot go back because it is a necessity to live” and at the present time it is important to keep striving and to be joining forces with each other. 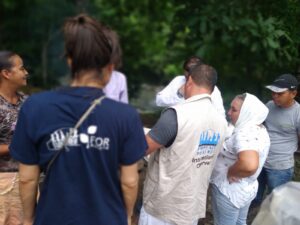 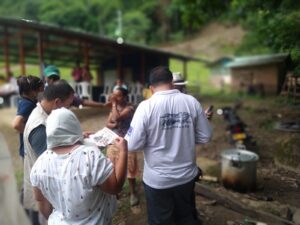