Accompanying a villager to fetch water.

Pinning a banner to show our presence

Strengthening community and advocating for justice.

DEHARMONIZED BY THE WAR, BY MINES THAT KILL AND MUTILATE AND BY PARAMILITARY CONTROL THAT COINCIDES WITH THE INTERESTS OF THE GLOBAL MARKET, AGRO-INDUSTRY, AND DRUG TRAFFICKING 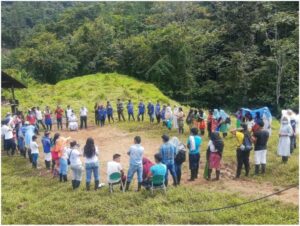 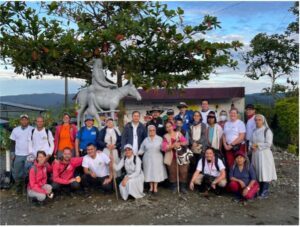 In response to the public appeal made by religious sectors in the face of the serious humanitarian crisis suffered by native peoples, black communities, and peasant campesino communities in different regions of Colombia, fifty people spent 5 days on a humanitarian mission in defense of human rights and the protection of the common home. It was led by bishops, priests, religious members of the Catholic, Lutheran, and Presbyterian churches. The mission also included representatives from the Laudato Sí movement, the CONVIDA 20 network, and was accompanied by Operazione Columba from Italy, FORPP, and FOR Austria. Finally, the mission was facilitated by traditional authorities, teachers, the indigenous guard, jaibanás and community members of the original territory in the reservations of the Emberá Eyábida, Popalito – Tascón, Nutria – Tascón and La Blanquita – Murrí people. Its goal was accompaniment, listening and visibility on the serious situation with respect to the violation of human Rights, ethnic rights and laws, international humanitarian law, as well as the impact on the physical and cultural survival of the Emberá people in the municipalities of Dabeiba and Frontino, Department of Antioquia.