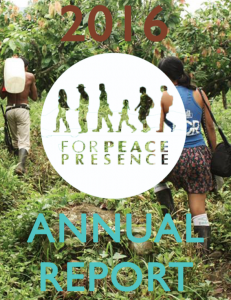 2016 has come and gone! This past year was full of change and transition, not only for Colombia, but for the FOR Peace Presence team as well. We said goodbye to our former Executive and Assistant Directors, and welcomed new faces. We saw the fruits of more than four years of negotiating between the FARC guerrilla and Colombian government reach a final peace agreement and, unexpectedly, watched as they were rejected in a national referendum. In December, we were reintroduced to another, albeit slightly altered, peace agreement which, bypassing a second referendum, was approved before the Colombian Congress.

In response to the uncertainty which the referendum brought, Colombia became increasingly dangerous for human rights’ defenders. We were able to continue to provide physical and political accompaniment to our partners, who continued to request our support throughout the year. We are proud to continue to keep our operating expenses low; with only USD 147,345 we were able to carry out our programmatic and operational work. We invite you to read the entire 2016 Annual Report here, and thank you for your ongoing support of our work.