Read more about that shift in 2019 here. 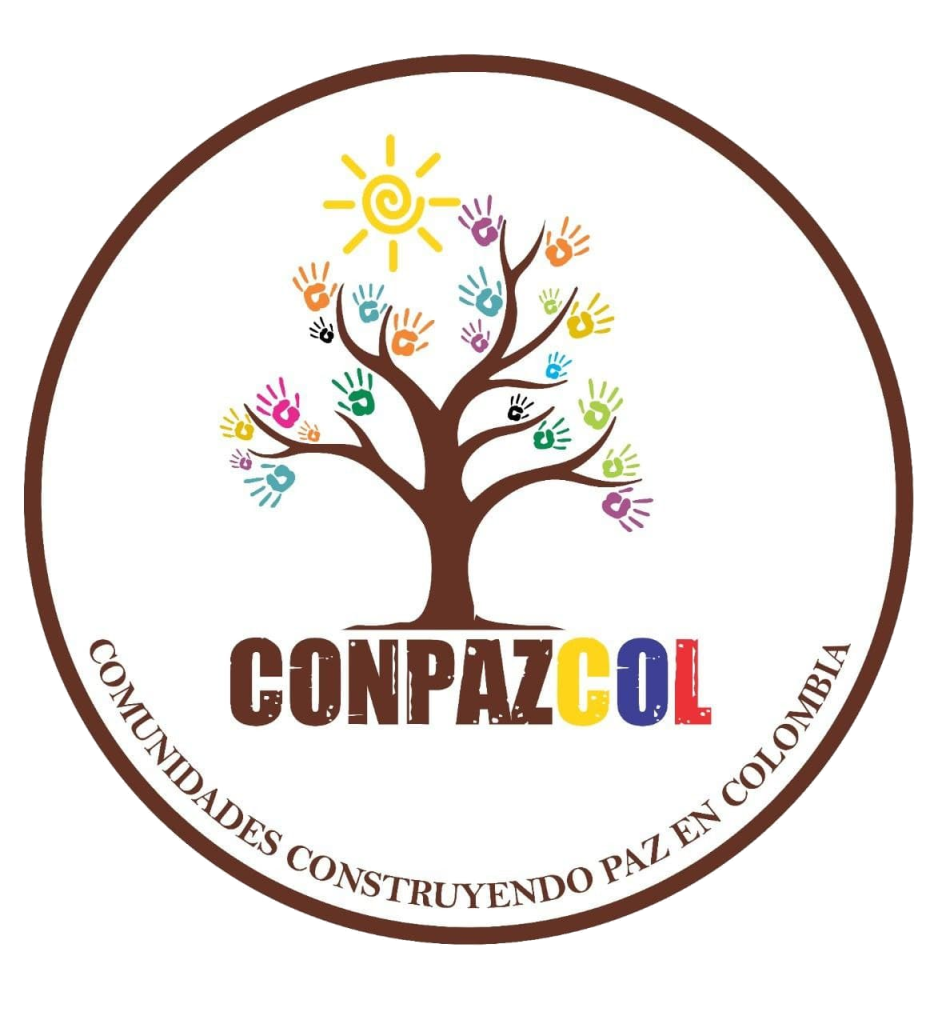 CONPAZCOL is a network of 140 victims’ organizations, present in 14 departments where the armed conflict still continues. Apart from its challenging work to strengthen community processes CONPAZCOL has presented decisive contributions to the peace negotiations in Habana.  FOR Peace Presence began accompanying CONPAZCOL in order to strengthen their security situation in remote areas and visibilize their concerns of the impact of the peace accords on national and international level via political accompaniment. Read More.

In the shifts in 2019, CONPAZ became a main partner to identify communities in their network that are on the frontlines of environmental defense and could benefit from our accompaniment.

Blanquita-Murrí is located in Frontino, Antioquia, a 4-hour jeep ride from Medellín. The total population of about 8,500 people includes: thirty indigenous communities grouped into seven reserves of the Embera Eyábada nation, seven Afro-Colombian communities who share a collective land title, and seven campesino (small-scale farming) communities. We wrote a few blog posts last year about this community, which you can find here and here. Throughout these communities, over seventy ex-combatants of the FARC have settled in Blanquita-Murrí since the signing of the Peace Accords between the FARC-EP and the government in 2016.

San José de León is located in Mutatá, Antioquia, very close to the Pan-American Highway and on the banks of the León River. It has been historically inhabited by campesinos.The community has been part of a re-incorporation process with the FARC-EP. Because of the large number of ex-combatants who are living in the area, there is ongoing concern about the presence of paramilitaries, and there have been various attempts to recruit and pressure former guerillas. Michaela wrote a short piece about this process and her visit to the community in 2019.

La Esperanza is an Afro-Colombian community that has been working to protect their lands for almost 40 years from outside interests. In 2003, they were displaced from their lands by paramilitary forces. In 2017, a Cali judge granted them provisional measures, recognizing their legal rights to those lands. However, this has not deterred external actors from taking over and selling off their lands to a powerful elite. They are in talks with the current mayor of Buenaventura about a process that would enable them to return.

The Mapiripán Association in Defense of the Environment (Asodeamapi) is a community group that works to protect their lands and sustainable farming practices from the large palm oil plantations. The collective includes indigenous and small-scale farmers. They began to organize against the palm oil company Poligrow when it was planning to install a plant to extract the native palm oil from the Las Toninas lake region, trees that are endemic to the Amazon. Since their founding, Asodeamapi has succeeded in declaring 3 ecological reserves to protect the native forests. They also plan nature walks to help recognize and study the local biodiversity. In the municipality, they have done advocacy with institutions and schools, as well as education campaigns for other local farmers.

Boquerón is a small community in Cesar that the environmental authorities ordered to relocate due to the high level of pollution by the coal mines. This involuntary resettlement was ordered in 2010, still the communities are waiting for dignified living conditions. Cesar is highly paramilitarized and in the last 20 years, has been subject to the arrival of various large multinational coal companies. These companies practice open pit coal mining, almost entirely for export to coal-consuming countries and regions like the United States and Europe. Open-pit coal mining is one of the most environmentally destructive forms of mining. 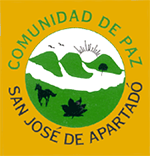 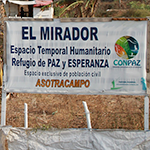 ACAMPO, a collective of 62 families, formed the community of El Tamarindo at the end of the 1990s on untitled wasteland in the outskirts of Barranquilla on the Atlantic Coast, land that was declared part of the free trade zone, generating the interest of powerful families in the region. After several evictions, in March 2014, ASOTRACAMPO created the temporal humanitarian space of El Mirador on their last remaining plot in an attempt to resist eviction and neoparamilitary threats. The community was tragically forcibly evicted in December of 2015. After that, FOR Peace Presence organized advocacy efforts in support of Tamarindo. Because of our support, their case was made a priority for the National Land Agency, and they were offered a new terrain to settle, although in Antioquia and not near Barranquilla. Click here to read more. 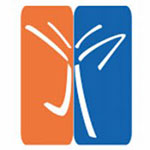 The Comisión Intereclesial de Justicia y Paz (CIJP) is a human rights organization composed of professionals from a range of fields with mainly Christian and humanistic backgrounds. The CIJP’s mission is based in the principles of international human rights law and a Christian  and humanistic understanding of human dignity. FOR Peace Presence currently accompanies CIJP mainly in and around the city of Buenaventura, analyzing carefully our dissuasion in this scenario where most threats are generated from splittered neoparamilitary groups. Read more.

The campesino way of life for 113 small-scale farming families in Nilo has been constantly threatened since the creation of Tolemaida military base in 1954, Colombia’s biggest military training bases. Since the base opened in 1954, the inhabitants of the hamlets Yucala, Naranjala and Mesa Baja in the municipality of Nilo, Cundinamarca (150 km from Bogotá) have consistently been subjected to the debasement of their rights, land, and quality of life. FOR Peace Presence accompanied Nilo mostly in case of emergencies and security incidents by political accompaniment. Read more. 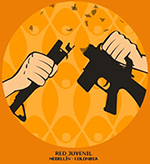 work is a youth organization that operates explicitly on principles of nonviolence. Started in 1990 by young people who had lost loved ones to the armed conflict, the group trains youth in nonviolence and cooperative play, supports young men who refuse to serve with the police, military or illegal armed groups, and promotes respect for human rights and youth’s ideas in Colombian society. A core group of about 30 young people work out of the group’s office and gathering space, a large house not far from the city center. Another 150 youth organized into neighborhood and issue groups are regularly involved in their activities. FOR accompanied the Red Juvenil from 2005 – 2013. Currently they are not an active partner. Read More. 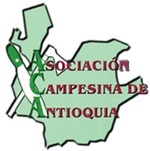 In Antioquia, the Peasant’s Association of Antioquia (ACA) was founded as an alliance between poor farmer communities to improve their lives and conditions and a focus on their rights to not be threatened, to farm and have land.  The ACA assists communities who are planning their own return to their lands and especially works in areas where multinational corporations are trying to enforce their interest in dams, resources or agricultural large scale projects (e.g. bananas, oil palms). ACA also has an extensive communications team that investigates and documents the experiences of rural communities. The videos they produce serve to preserve the memory of what has happened in these places, why they were displaced and how they have organized to return. Read More.

Tierra Digna is a Colombian organization dedicated to the defense of communities affected by economic policies and projects that threaten their territories and lead to human rights violations and environmental devastation. The accompanied communities and Tierra Digna and its members are facing constant intimidation and attempts of discreditation as they challenge legally and politically global injust structures and powerful actors involved, such as the State, military and transnational corporations. FOR Peace Presence accompanied Tierra Digna in its thematic area of coal mining and the related topic of human rights and business. Read more. 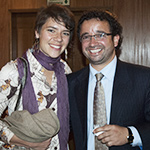 veral high profile human rights defenders who are often stigmatized and threatened for doing their legal and political work. Human rights defenders work tirelessly to hold the Colombian government accountable for human rights violations and uphold the rights of vulnerable populations.   They often endure threats, stigmatization, and attempts to delegitimize their work.  At FOR Peace Presence, we stand with these human rights defenders seeking to maintain and expand the space that they have to effectively work. We provided accompaniment to human rights defenders Jorge Molano and German Romero, who litigate emblematic human rights cases involving powerful interests and often implicating Colombian Generals and other powerful political figures—two landmark cases include the Colombia Judicial Palace Case and the 2005 massacre of the Peace Community.  Jorge Molano and German Romero recently filed charges requesting that the Colombian public forces be investigated for their abuse of power and use of violence against unarmed civilians during the National Grassroots Agrarian protests.