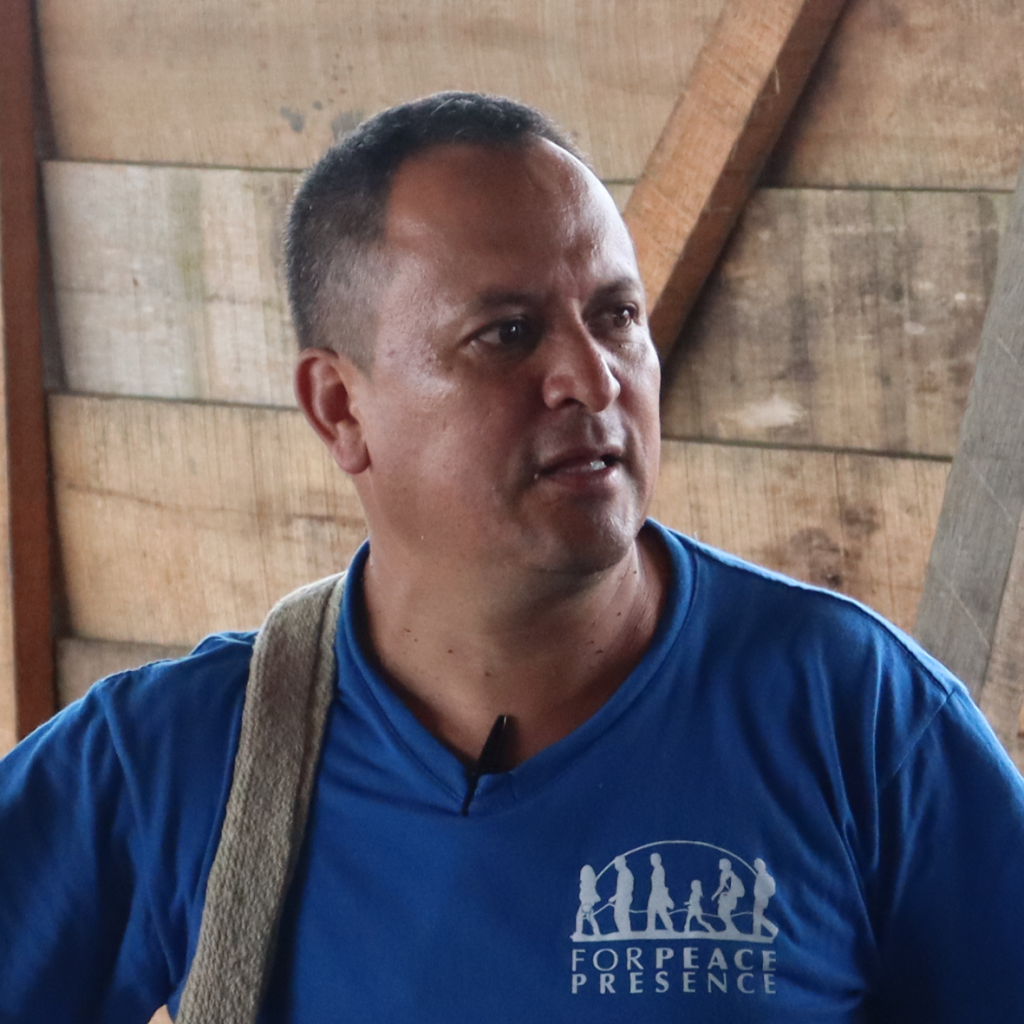 Enrique is a social leader, human rights defender and member of the victims’ network Communities Constructing Peace in the Communities (CONPAZ). In 2017, he was selected the Human Rights Defender of the Year in the national awards for human rights, granted by Diakonía and the Swedish Church. He began his social justice work with the Catholic Church, doing pastoral and missionary work for seven years in different regions of Colombia, such as Santander, Boyacá, Antioquia and Cundinamarca. Then for over 23 years he worked in the Inter-Church Peace and Justice Comission, accompanying communities in processes of civil resistance and the construction of peace in the midst of  armed conflict, in the regions of Chocó, Antioquia, Meta, Putumayo, Cauca, Valle de Cauca and Huila. 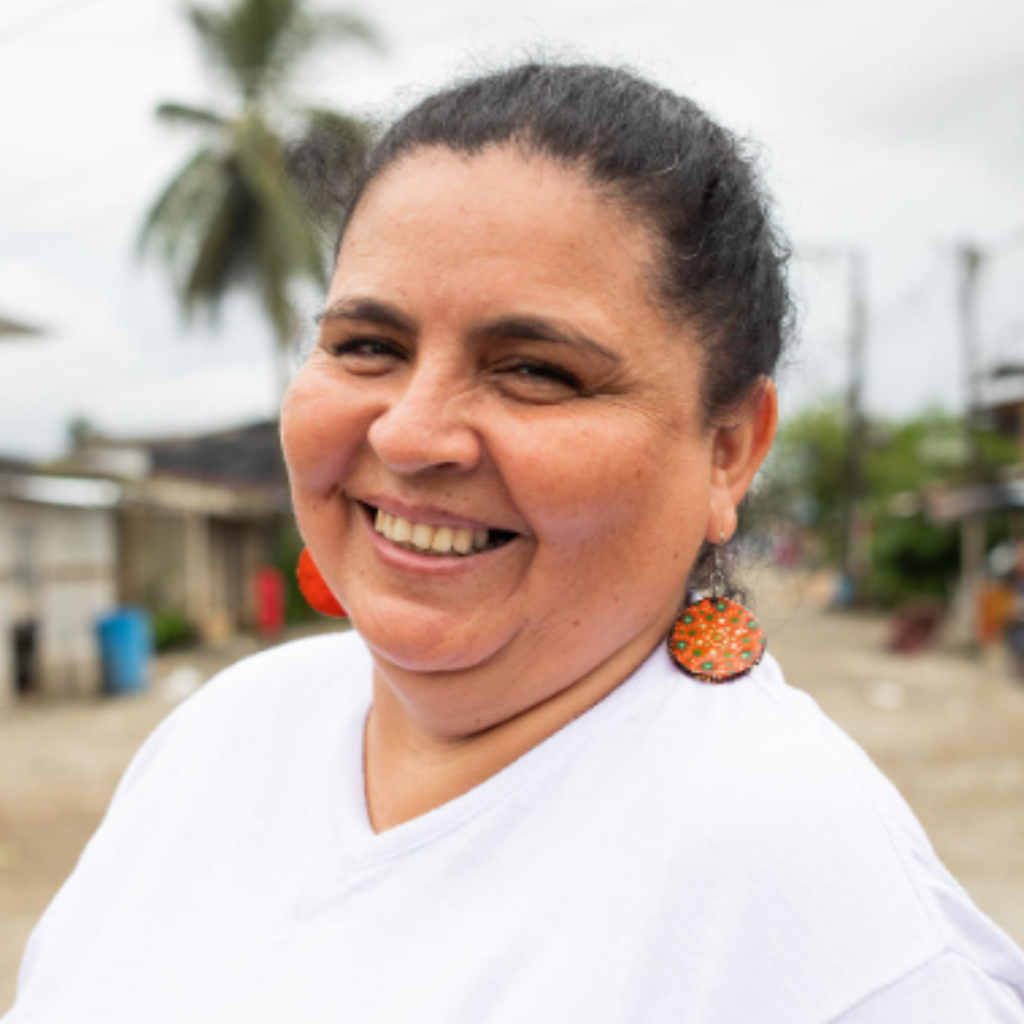 María-Eugenia is from the outskirts of Popayán, in the department of Cauca. She studied ethno-education at the University of Cauca. She is a human rights defender and victim advocate. She first got involved with human rights work with the Comunidades Eclesiales de Base (grassroots faith communities) in the poor neighborhoods and rural areas around Popayán. Between 1991 and 2001, she was a volunteer with the Inter-Church Commission of Peace and Justice. Between 2001 and 2018, she worked for the Commission,  accompanying Afro-Colombian, indigenous and small-scale farming communities who are victims of the social and armed conflict, and are building models of humanitarian protection in rural and urban areas in the departments of Chocó, Antioquia, Valle del Cauca and Meta. In 2022, María-Eugenia was selected as the recipient of the United States Insitute of Peace’s Women Building Peace Award based on her skills and track record in using the many instruments of peacebuilding, her effectiveness in representing traditionally marginalized communities during the peace talks in Havana, and the impact of her 30-year commitment to advancing peace in Colombia.

Michaela Soellinger (accompanier with FOR Austria) 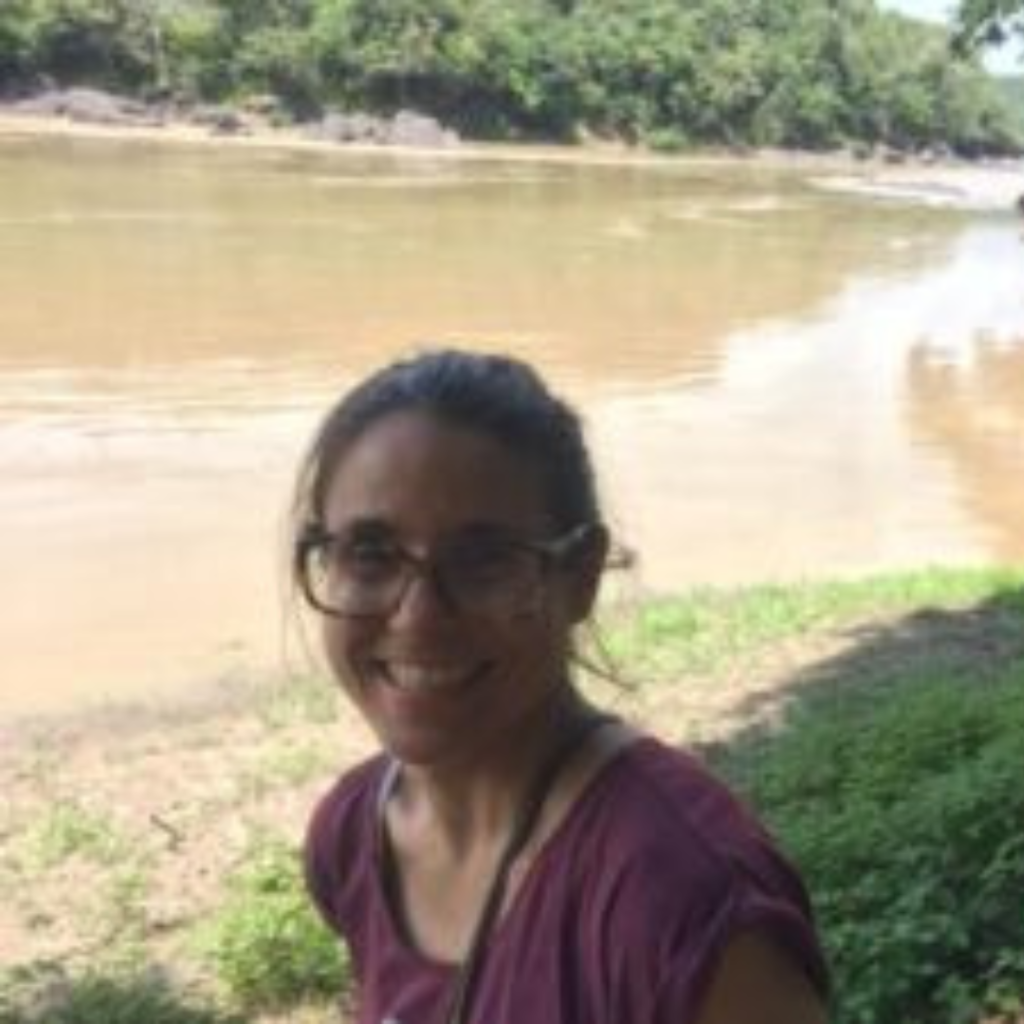 After growing up in the Austrian countryside, Michaela volunteered in accompanying asylum seekers and migrants in Austria an Switzerland while studying physics. A few years ago Michaela decided to focus on peace work and went to Guatemala to volunteer as an International Accompanier. She fell in love with the idea of International Accompaniment. In March 2013 Michaela and first joined the FOR Peace Presence Team in March 2013 for 2.5 years. with FOR After finishing her studies in Peace and Conflict and collecting more experiences in different types of accompaniment, she is now is now happy to rejoin the FOR Peace Presence team in colaboration with FOR Austria. 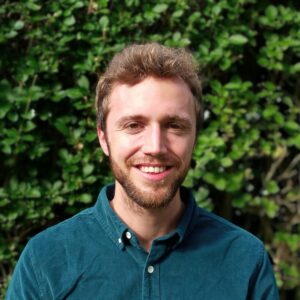 Manuel grew up in Zurich, Switzerland and completed a Master’s degree in Human Geography with a specialization in Political Geography, during which he wrote his thesis on the tension between collective and individual rights in Mexico. He worked on land and territorial rights in Argentina, later with a Swiss NGO in the field of agroecology, and then was an international accompanier for Peace Brigades International (PBI) in Colombia from 2019-2021. His time with PBI motivated him to continue working for human rights and nonviolent resistance in Colombia. 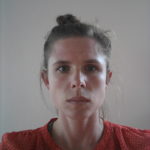 A former FOR-USA accompanier, Emily holds a degree in Arts and Global Studies from the University of Minnesota. She has also worked in translation and, more recently, as part of an investigation on increasing security or human rights defenders in Colombia. Emily was appointed to this newly-created post in the summer of 2016.

Dominique lives in Orlando, Florida and has accompanied farm worker movements since 2007. She was an accompanier with FOR Peace Presence in 2012. Since then, she has made various visits back to the Peace Community. After working with FORPP, she returned to the US and studied to begin working as a massage therapist. From 2017-2019 she was the coordinator for the youth network of the National Farm Worker Ministry, a non-profit in Florida. Currently she is returning to her work as a massage therapist and is a very active volunteer in the farm worker movement in Florida. 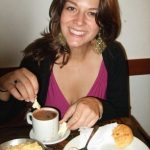 Candice served as the Executive Director of FOR Peace Presence from 2013 to 2016. Currently she works for School of the Americas Watch in Bogotá. Originally from Southern California, she’s spent the last decade as an activist and organizer, including working from 2009 to 2012 for Witness for Peace. With WFP she worked on cross-cultural grassroots coalition building, advocacy meetings, physical accompaniment, educational programs for U.S. citizen delegations, organizing speaking tours, and using multimedia to share stories. A dedicated activist and organizer, she is passionate about social and environmental justice, human rights, and corporate accountability.

Passionate about actions of civil resistance, Sophie was an accompanier and later coordinator for FORPP between 2015 and 2017. She became enthusiastic about international accompaniment through this experience and grew to understand the potential of Colombian activists, which led her to continue supporting their movements from Brussels as part of the International Office for Human Rights Action on Colombia (OIDHACO).  It also led her to join the board of FORPP. Currently, she is based in Paris as the Advocacy Coordinator for a network of French NGOs involved in international solidarity.

Cristina Espinel arrived to Washington, DC in 1980 to complete her education and has a Master’s degree in counseling from George Washington University and is specialized in play therapy. Cristina co-founded the Colombia Human Rights Committee in 1981 and has been an active member ever since. She also co-founded the US Office on Colombia in 1997 and the Mental Health Department of the Clinica del Pueblo in the early 1990s. She founded the counseling program at the Calvary Bilingual/Multicultural Learning Center, today known as Centronia. She is married to Charlie Roberts, lawyer and professinal translator and interpreter. They have two children Julian Roberts (BA in international relations, Tufts University, Medford Massachusetts, 2008); and Sarah Tila Roberts (BA, Hampshire College, Amherst Massachusetts, May 2012). 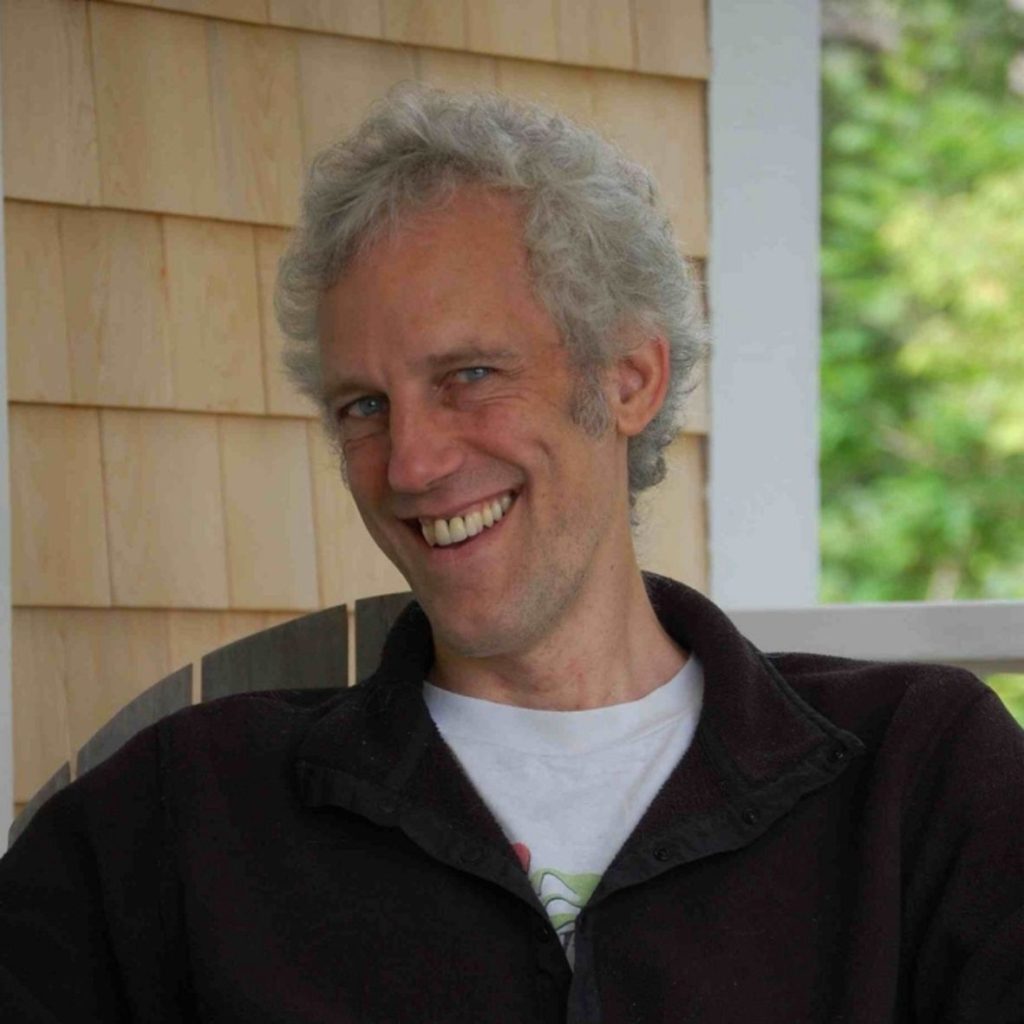 John Lindsay-Poland has written about, researched and organized action for human rights and demilitarization of US policy in Latin America for 30 years. Currently he coordinates Stop US Arms to Mexico, a project of Global Exchange, and serves as California Healing Justice Associate of the American Friends Service Committee, with a focus on police demilitarization. From 1989 to 2014, he served the interfaith pacifist organization Fellowship of Reconciliation (FOR), as coordinator of the Task Force on Latin America and the Caribbean, as research director, and founded FOR’s Colombia peace team. He is author of Emperors in the Jungle: The Hidden History of the U.S. in Panama (Duke University Press, 2003). He is also principal author of Assisting Units that Commit Extrajudicial Killings: A Call to Investigate US Military Policy Toward Colombia (with Amnesty International, 2008); Military Assistance and Human Rights: Colombia, U.S. Accountability, and Global Implications (with U.S. Office on Colombia, 2010); The Rise and Fall of “False Positive” Killings in Colombia and the Role of U.S. Military Assistance, 2000-2010 (with Coordinación Colombia-Europa-Estados Unidos, 2014); as well as articles, reports and books on U.S. military bases, policy, and history in Latin America. From 2003 to 2014, he edited a monthly newsletter focused on Colombia and U.S. policy, Latin America Update.

Originally from the U.S., Pendle has been working in NGOs in both Latin American and the U.S. for the past six years. She has organized campaigns on the local, national and international level for just labor and human rights policies. She is a graduate of Swarthmore College in Philadelphia, where she studied Sociology and Anthropology with a minor in Latin American Literature. She’s lived in Ecuador, Spain, Colombia and Mexico as well as the United States. She is especially interested in international development and social entrepreneurship and spent a year in Mexico on a Fulbright scholarship in 2018-2019, taking Master’s classes in business administration and intensive courses in entrepeneurship as the Autonomous Technical Institute of Mexico (ITAM) and in the National Autonomous University of Mexico (UNAM), respectively. She worked as an international accompanier with FORPP for a year and a half, and is excited as a Board member to support capacities in communication and advocacy. 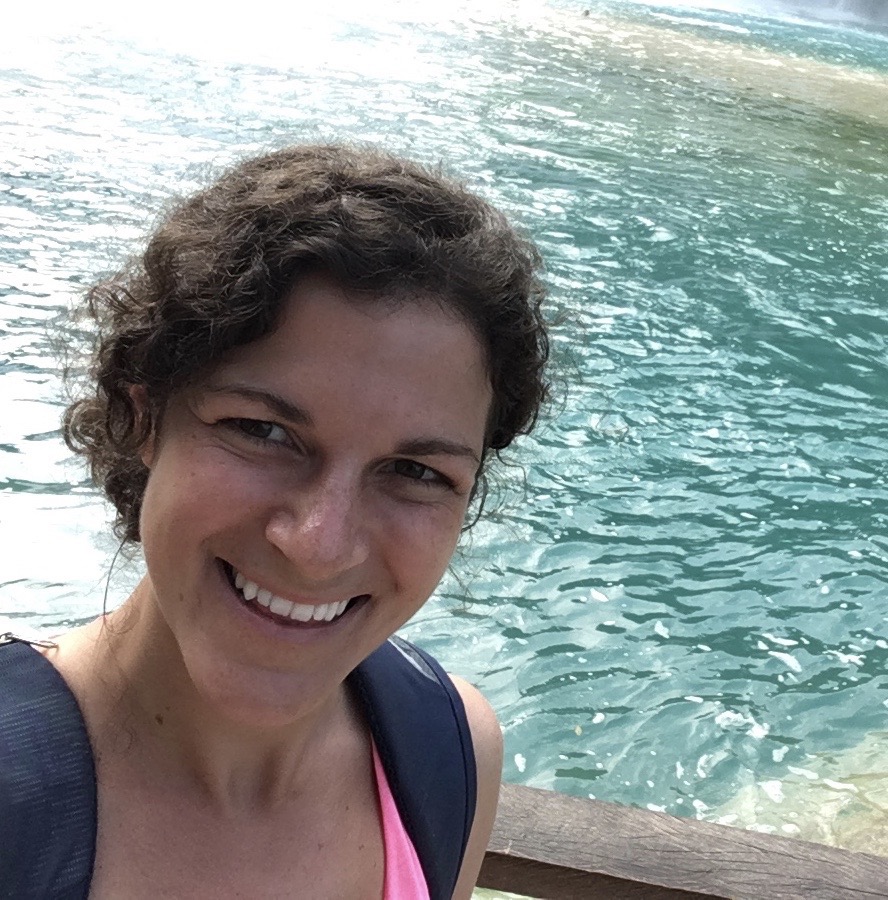 A former accompanier with FOR Peace Presence, Kati is from the small town of Norfolk, Connecticut. After 18 years in the woods, she was ready to broaden her horizons by attending the University of California at Berkeley. She majored in Peace and Conflict Studies with a minor in Global Poverty and Practice. She spent a year in the Dominican Republic working as Assistant Director and Volunteer Coordinator for a small organization that served primarily Haitian migrants and Haitian children that were on the streets. She is excited to be able to work again with FOR Peace Presence and human rights defenders in Colombia.