In 2022, we celebrate 20 years of protective, unarmed accompaniment in Colombia. Join us on our journey through our anniversary year!

20 years ago, in 2002, we began to accompany the Peace Community of San José de Apartadó. We start this year with a series of webinars together with the Peace Community, which is celebrating 25 years of resistance in the territory. Safe the dates of our webinars! Sign up to our newsletter or follow us on Twitter, Instagram or Facebook to get the details about each webinar. 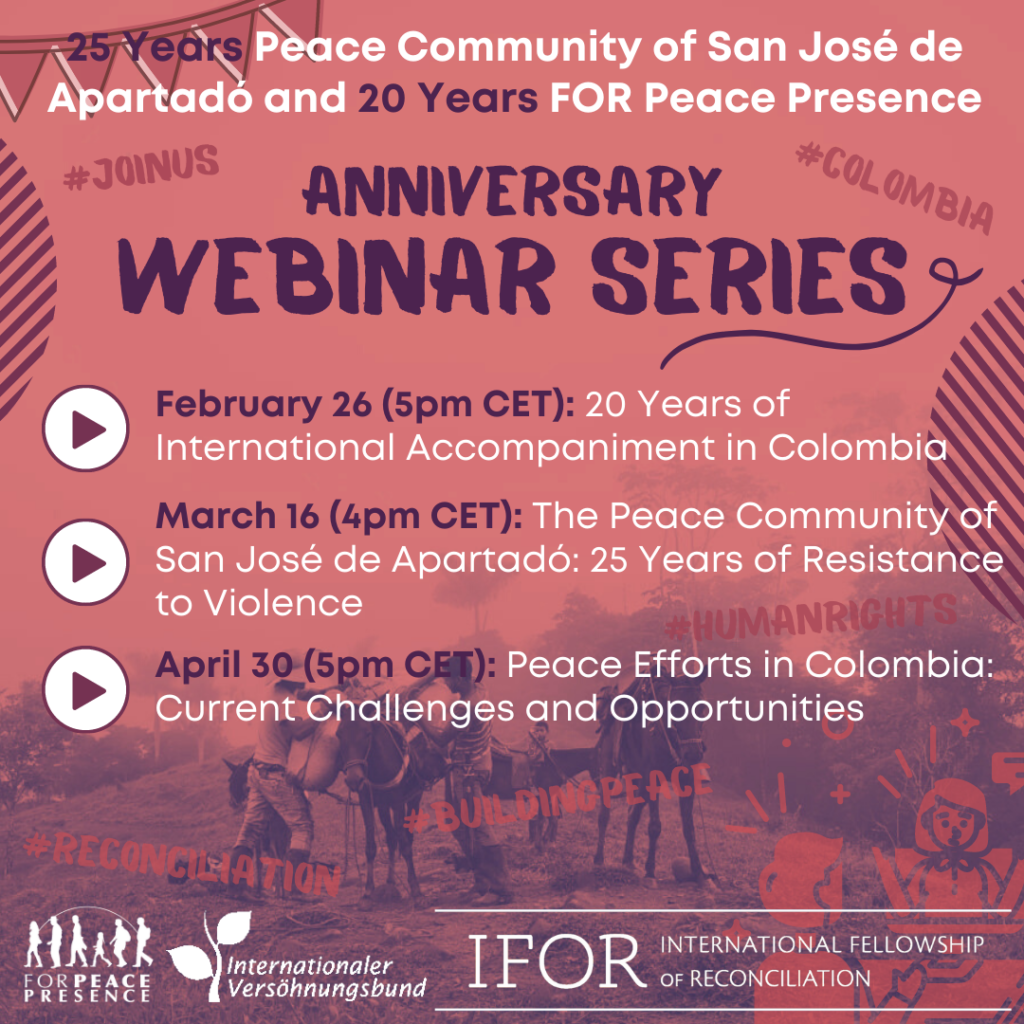 During this anniversary year we want to share with you some highlights from our work and especially bring to you the voices of the accompanied communities. We start this series with a song of Bladimir Arteaga “Blacho” of the Peace Community of San José de Apartadó, who dedicated a song of resistance called “Aún seguimos caminando (We are still walking)” to the 20 years of FOR Peace Presence in Colombia. (Make sure English subtitles are on)

La Muchacha, a colombian singer-songwriter, participated in the 25th anniversary of the Peace Community of San José de Apartadó in march this year. For the first time she played the song she dedicated to the Community in its territory. She named it “No Azara”, which means: “I’m not scared”.

Many of our accompanied communities are land defenders and risk their life to protect land, life and dignity. The Peace Community states clearly: “The struggle against the multinationals and against the state may be lost, but at least we leave humanity the history of how we have fought.” Get to know more about their struggle for land.

This year, the Peace Community of San José de Apartadó celebrates its 25th anniversary. Since 20 years, FOR Peace Presence accompanies the Community directly. Let’s look back on the commemoration of 25 years of non-violent resistance in the territory, 25 years of building peace and fighting for land, life and dignity.

One of our allies, the Bishop of the Lutheran Church of Colombia, sent us some special greetings for our 20th anniversary

On our 20th anniversary we also want to give a voice to the Human Rights Defenders we are accompanying. Check out the videos and get to know them and their struggle! (make sure English subtitles are on)