We work on many issues. Here are the main topics and the facts in detail.

The United Nations recognizes the right of conscientious objection to military service since 1987 as part of the right to freedom of thought, conscience and religion enshrined in both the Universal Declaration on Human Rights and the International Covenant on Civil and Political Rights, ratified by Colombia.

Article 18 of the 1991 Colombian Constitution guarantees freedom of conscience and Colombia is also a signer of the Universal Declaration on Human Rights, Despite Colombia’s Constitution and international standards, military service is obligatory for men and for many years the right to conscientious objection was not recognized.

However, in Colombia although this right is constitutionally recognized by the Constitutional Court sentence C-728/09 of October 2009,  the Army has denied to guarantee the right of conscientious objection to military service, arguing that there is no law which regulated this fundamental right. It was until February 2015 that the first conscientious objector to military conscription openly obtained a professional degree without the military identification card.

Since 2010 the UN Human Rights committee insisted that the Colombian State “should, without delay, adopt legislation recognizing and regulating conscientious objection so as to provide the option of alternative service, without the choice of that option entailing punitive effects, and should review the practice of “round-ups”.

Furthermore, because conscientious objectors do not have the so-called libreta militar (military service card), they face discrimination: they cannot seek public employment or enter into any formal working relationship. They are also not able to stand for public office. In this way, the lack of recognition of conscientious objectors not only violates their right to freedom of conscience, but subsequently their rights to work and education.

Conscientious objectors are not the only ones whose rights are being violated. Any young man between the ages of 18-25 is at risk of being illegally recruited. Illegal street round-ups (or batidas in Spanish) are the practice of rounding up groups of young people in public places to check if they have resolved their military situation according to the law, and then to bring all those who cannot show the relevant papers to the military barracks for incorporation into the Armed Forces. Batidas are widespread, illegal and have been recognized by the United Nations as an arbitrary detention. Also the Constitutional Court in several sentences,  C-879/11 and T-455/14, recognized the unconstitutionality of this practice:

In July of 2014, the Constitutional Court issued a ruling that stated that “in regards to restrictive measures of personal liberty which lack judicial authorization, roundups or raids (…) are prohibited by the Constitution” and reaffirmed that conscientious objection to the military service is a fundamental right.

However, organizations like ACOOC still denounce these batidas as a systematic way of recruitment used by Armed Forces in the country and especially in low-income neighborhoods of Colombian cities.  Youth in various regions of Colombia are working to resist and denounce this illegal practice.

FOR Peace Presence has worked extensively on the issue of conscientious objection and illegal street rounds ups in the following ways:

To learn more about conscientious objection, read our articles on this issue. [/toggle][toggle title=”Extractive Industries”] 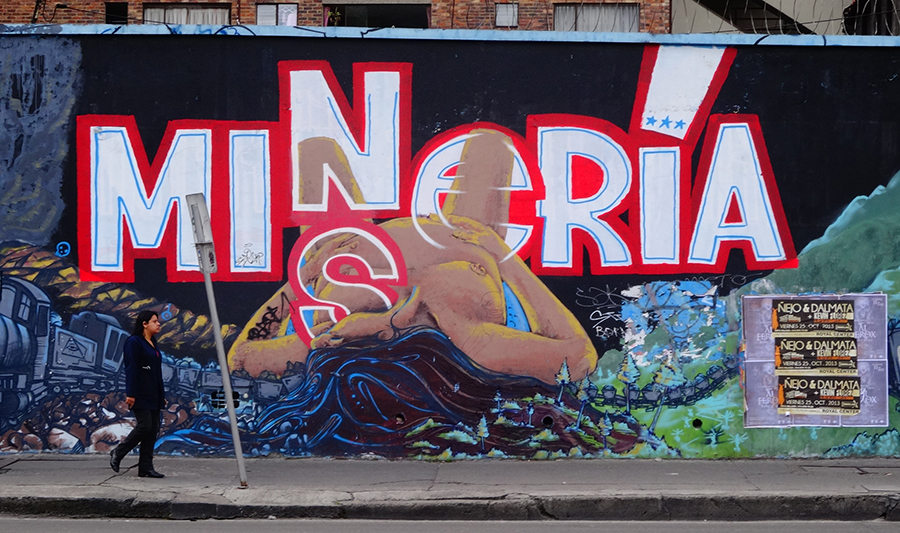 In the last years, Colombia has been pursuing an economic strategy based on an aggressive promotion of free trade. The GDP has increased by more than 4% per year in 2012-2015 and helped to attract foreign investments in the country. However, Colombia is still depending on energy and mining exportation so it is a particularly vulnerable country to fluctuations of raw materials prices. In 2014, Colombia was the fourth main country in exporting coal in the world, producing 75 billions of tons per year.

Since 2010, the Santos administration has focused his foreign policy in strengthening commercial links and impulse foreign investment in the country. Colombia has signed or is negotiating free trade agreements with more than a dozen of countries, including the U.S., Canada, European Union or Israel.

The National Development Plan 2010-2014 has targeted five main objectives, including mining development and energy expansion. Following the Uribe administration who wanted to convert Colombia into a mining country, Juan Manuel Santos has spoken about the “mining locomotive”. The mining sector is aimed to drive other economic sectors and generate funds for social inversion.

Nevertheless, the current reality about the mining sector is other. The huge increase of mining licenses delivered by the Colombian State since the Uribe administration has brought dramatic environmental consequences in some regions without improving economic conditions for local populations.

Colombia is the first Non-European country to draft its National Action Plan on Business and Human Rights. Colombian civil society, among them Tierra Digna, has heavily criticized the flaws of this plan, in terms of participation, in the lack of remedy mechanisms and assuming the perspective of the business sector instead of a human rights approach.

The mining sector is also not escaping from accusation of human rights violations in Colombia. Some transnational mining companies have been accused of cooperation with paramilitary groups to protect their infrastructures from guerrilla attacks but also to displace populations living in strategic places for mining exploitation. These situations have been denounced by local populations but also by demobilized paramilitary members during Justice and Peace trials.

Another type of human rights violations is the displacement by mining projects. Today, companies interested in places for mining exploitation can legally relocate local populations without negotiations (if they are not afrocolombian or indigenous communities). Some displacements also occurred afterwards, when the contamination provoked by mining exploitation is so high that local populations cannot live there anymore.

FOR Peace Presence has worked specifically on the issue of extractive industries human rights violations in the following ways:

To learn more about extractive industries, read our articles on this issue.

Colombia has often been referred to as the country with the worst human rights record in the Western Hemisphere, although there are also extremely volatile situations in Mexico and Honduras more recently. The United Nations has estimated that approximately 80% of all killings in Colombia’s civil conflict have been committed by paramilitaries, 12% by leftist guerrillas, and the remaining 8% by government forces.

In most cases of human rights abuses, there is no justice and the crimes remain in impunity, unfortunately sending the message to perpetrators that those who commit violent crimes will not be held responsible for them. It also remains a danger to denounce human rights violations and fight against the impunity of such crimes in Colombia.

Although peace negotiations started between the government and the FARC in 2012 and attacks between armed actors have caused less casualties in 2015, attacks against human rights defenders have steadily increased and a hostile and insecure environment for claiming respect for human rights persist. According yo UNHCHR in 2015 the number of homicides of human rights defenders exceeded the average of the last 20 years; the most threatened defenders are those working on conflicts over land, demand for justice, social and political leadership and peace activism, While Somos Defensores registered 209 aggressions in 2012, numbers have more than doubled in 2015 with 539 aggressions. Just from 2014 to 2015 aggressions increased by 13%. Another worrisome tendency is the arbitrary use of the justice system to criminalize and judicialize human rights defenders.

Human rights defenders are worried about a possible increase of political violence in a post-accord scenario and have explicitly asked international accompaniment organization to maintain their presence in Colombia.

The National Protection Unit and the Colombian State has been criticized by human rights defenders as not investigating the causes of the aggressions against human rights defenders, that the design of the protection measures are not designed with and according to the needs of defenders (such as collective measures, gender sensitivity, specific characteristics of rural areas) and that there has not been a political recognition of the importance of their work for the respect of human rights.

Extrajudicial executions (more known in Colombia as “falsos positivos”) refer to cases in which military officials killed civilians and dressed them up afterwards as guerrillas, presenting the dead as “killed in combat” to their superiors. For a number of years, these deaths would be “awarded” with money and/or days off.

As of August 2012, the Human Rights Unit of the Attorney General’s Office was investigating 1,727 cases of alleged extrajudicial executions committed by state agents throughout the country involving nearly 3,000 victims; since that date this office has obtained convictions for less than 10 percent of the 1,727 cases under investigation. The overall impunity rate is as high as 98.5% in alleged cases of extrajudicial executions according to Amnesty International.

FOR Peace Presence has worked particularly on the issue of human rights, justice and impunity in these ways:

To learn more about human rights, justice and impunity, read our articles on this issue.

While prohibition, control and/or taxing substances (drugs and alcohol) determined to be harmful to human health, is not new to U.S. domestic policy, the specific term “war on drugs” was coined by President Nixon in 1971; in the forty years since then, the U.S. has spent over $25 billion fighting the war on drugs.

This is not unique to the U.S., but rather, a global phenomenon. As of June 2011, according to the Global Commission on Drugs, the drug business is estimated to be the third biggest in the world, after oil and arms. According to the same report, worldwide consumption and production of drugs hasn’t declined: worldwide opiate consumption increased by 34.5% in the last two decades, and that of cocaine by 25%.

In 2000, the U.S. government approved Plan Colombia, a military aid package ostensibly focused at fighting Colombia’s war on drugs. The main strategy was to fumigate the coca crops (the plant that is used to produce cocaine), flying planes over large swaths of land in southern Colombia where it was suspected that the illegal crops were being grown. The planes dumped large amounts of toxic chemicals on the plants causing them to wither up and die. Over the last 13 years, the U.S. has continued to fumigate various areas of the country. Unfortunately the spraying is incredibly imprecise and often times affects people’s legal crops.

Trying to eradicate drugs at the source (i.e. fumigation) is the least effective way to impact the drugs business. In the early ‘90s the U.S. government hired the RAND Corporation, a conservative think tank, to analyze the cocaine trade. They concluded that every dollar invested in treatment is 23 times more cost effective at reducing cocaine use than every dollar spent on trying to stop people from growing or transporting drugs in a source country (like Colombia).

In fact, despite all the money spent and coca crops fumigated, many people in the U.S. continue to use drugs. In 2010, the U.S. government estimated that 47% of the nation’s population has used illegal drugs and over 20 million people needed drug treatment, but never received it. Around 8 million of them wanted to enter a treatment program, but just couldn’t afford it.

We continue to designate 2.6 times as much money into policing and prisons as we do into treatment and prevention, even though the opposite has been shown to have a bigger impact on reducing drug use.

The drug war affects many people adversely, but those who suffer the worst consequences are the poor and people of color in both Latin America and the U.S. For example, in the United States there are more African American adults in prison or on parole today than were enslaved in 1850 (most of them imprisoned on minor drug charges). There are more black people in the U.S. who can’t vote today because they are convicted felons than in 1870, the year the 15th Amendment was ratified, which prohibits laws that deny the right to vote on the basis of race. And since the beginning of the war on drugs, the U.S. prison population has increased by 360%!

We consider that the war on drugs is racist, expensive and a total failure. In 2012, we published a popular education booklet Blown Away: The War on Drugs, Feedback from the Frontline that explains the complexities of the war on drugs. It’s time for change!

To learn more about the drug war, read our articles on this issue.