Speaking tours are an important way that international audiences can hear directly from Colombian leaders and human rights defenders about what is going on in Colombia. The relationships and connections that come out of speaking tours help us build international networks of support and solidarity, strengthen the movement on both sides and demand that our policymakers design better policies. If you are interested in hosting a speaker on tour in your area, please contact us.

Bridging the Americas: Black Lives Matter Everywhere, from Colombia to the U.S.

In April 2014, a courageous Afro-Colombian community took a stand against violence that had controlled their lives for 15+ years, transforming their neighborhood into a peace zone. The same year, the Movement for Black Lives ignited in the United States, vividly drawing national attention to an epidemic of state violence against Black communities. The Bridging the Americas tour traveled across the U.S. in November 2016, bringing the voices of Colombian activists and BLM organizers together to share experiences, stories and tactics for nonviolent social change.

Check out highlights from the trip below: 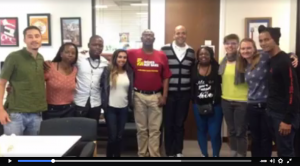 Click here for more details on this speaking tour

Human rights defender Johana Rocha from Tierra Digna and FOR accompanier Kaya Allan Sugerman traveled throughout the Northeast and Bay Area October 20th through November 16th to talk to audiences about environmental extractivism and human rights. Tierra Digna is a Colombian collective of lawyers working with rural communities that face being forced off their land by armed groups, the Colombian state and multinational corporations. 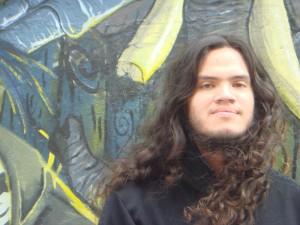 In 2012, we organized a speaking tour with Colombian youth Sebastián Patiño, a 19 year old Colombian conscientious objector, for whom violence has not been just part of the media and video games: “My entire life, I have witnessed violence, violence through the windows of my house and violence that was projected onto the TV screen. Although I am young and Colombian, I have not been a simple witness; the armed conflict has knocked on my door, always with bad news.” Sebastián is an active member of  ACOOC, Conscientious Objectors’ Collective Action, a Bogotá based group of young people promoting non-violence and freedom of conscience. The tour included stops in North Carolina, DC, Upstate New York, northwestern Pennsylvania, Nashville and Atlanta. 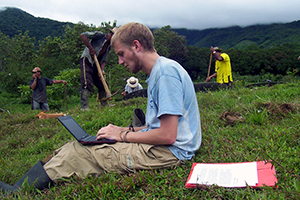 In 2012, FOR team member Isaac Beachy went on the speaking tour “Everyday Solidarity: Isaac Beachy on Nonviolent Accompaniment in Colombia” for two weeks through the mid-west and east coast. Isaac Beachy had recently returned to the U.S. after two years accompanying and living with the peace community of San José de Apartadó and working from FOR’s office in Bogota. He traveled through the states of Virginia, Pennsylvania, Ohio, Indiana, and the D.C. area, a total of 2,700 miles. He spoke at 26 separate events to an estimated 535 people. 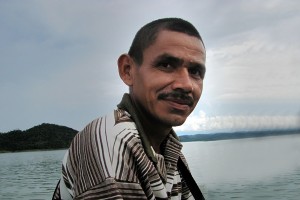 In 2011, FOR, Peace Brigades International (PBI), and the Latin American Studies Program at Loyola University (Chicago), organized a speaking tour with Jesus Emilio Tuberquia, one of the founding members and legal representative of the Peace Community. He was on a nationwide tour from March 24 until April 20 to talk about what led to his town’s decision to become a “Peace Community,” and the importance of international solidarity for their survival. He visited Austin (TX), Oakland (CA), Colorado Springs (CO), Albuquerque (NM), Chapel Hill (NC), Washington (DC), Utica (NY), and Chicago (IL). 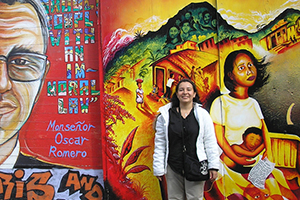 In 2009, FOR hosted Adriana Roman, youth activist and human rights defender on a week long speaking tour in the Bay Area.

“Through our dreams we take a chance, we defy what has been imposed on us, we insist on living differently. The proposal of the Red Juvenil is to build a collective, to come together, live and unlearn together, to defend dignity, that of our own and many others.” – Adriana Roman, Medellín Youth Network

Adriana spoke to university students, activists and members of the Colombian community. To read more about her visit, click here. 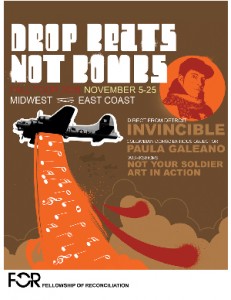 In 2008, FOR’s Nonviolent Youth Collective (NVYC) and Colombia program, in collaboration with the Not Your Soldier Project, organized a Hip-Hop tour with Colombian and U.S. conscientious objectors (COs) to the military called “Drop Beats Not Bombs: Resisting Militarism Through Creative Action.” The tour included speaking events, workshops and hip hop concerts. The purpose of the tour was to train and empower youth to support each other in resisting militarism through creative action, including building the international conscientious objector’s movement. We traveled caravan-style with Red Juvenil activist Paula Galeano, two FOR staff, organizer Isaac Martin and Detroit-based hip-hop artist Invincible. Our tour included 15 stops in 6 states, launching in Minneapolis and ending in New York City, covering a total of 2557 miles. To read more about the tour click here.

“Nothing will end war unless the people themselves refuse to go to war.” ~Albert Einstein